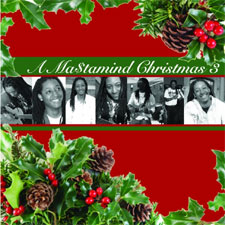 There are two things every West Indian especially a Trinibagonian must have come Christmas morning, no matter where in the world they might be. Ham and Pastelle.

It is therefore no shock that the Ma$tamind camp has brought this must have combo from our kitchens to our hungry listening souls this Christmas, as a featured song on there latest album A Ma$tamind Christmas 3.

In the real spirit of the season Ma$tamind brings a genuine homey feel back to the seasonal music made for this time of year. With soon to be family favorites like Come Lewwe Parang old memories are rustled while new golden ones push themselves into creation.

Laughter and smiles that have nothing to do with expensive gifts and all to do with the gathering of loved ones flow effortlessly from this album that boasts of many good friends and family coming together to celebrate in song with the award winning music camp. Some of the featured acts this year include Patch, Leon Coldero, Naki, Third Bass, Peter De Royce, Merc, Mr. Shammi, Lady Tantalizer, Simple Dread and Krissy Grant from ST. Lucia. Fuki, sister of Eddie Charles, teams up with Da Ma$tamind for a humorous song titled Christmas by Your Mother, which along with Patch's Big Turkey, will keep you thoroughly entertained.

A Ma$tamind Christmas 3, like the two earlier volumes, contains memorable surprises one of which we cannot help but reveal. For the first time ever, since the inception of these much anticipated musical Christmas series, Shawn Noel is singing solo on a track written by him and his wife! With so much to look forward to, it is near impossible to contemplate choosing a favorite song off of this must have album, even though fans are already proclaiming Ham and Pastelle by Da Spirits to be theirs. This soca parang instrumental, arranged and composed by Shawn Noel also features Shawn on all instruments, has captured the soul and dancing feet of parang enthusiasts worldwide. Maybe it is the memory of the meal or the yearning for a Trinibago style Christmas breakfast that has them so enthused…only one real way to find out ... pick up a copy of the album and see for yourself.

A Ma$tamind Christmas 3 is now available digitally at http://www.trinidadtunes.com/ and in stores on November 7th 2008.

Ma$tamind Productions, an award-winning, full range music production and Management Company, was founded in 2005 by Natasha Andrews-Noel and her husband, producer/composer Shawn Noel in Brooklyn, New York. The company's production catalogue consists of 14 compilation albums, countless hits  and collaborations with today's leading Soca artistes. Through the Many Voices, One Sound initiative, Ma$tamind seeks to aide in the creation and promotion of Soca on an international level.