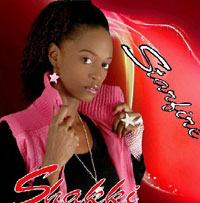 The track is scheduled to be released on St.Kitts Freedom FM’s Island Riddims show with popular radio personality EK , WINN FM’s Killing Drive Time with GQ and the Sugar Bowl Morning Express . The single has been released . online and has already quickly made the rounds on the world wide web on a number of top soca music sites including islandmix.com, trinijunglejuice.com and tropicalfete.com

The single was written by Shakki with production work by DJ Kells of SKN Entertainment . Kells is a well known Radio Personality and up and coming producer and promoter.

The flamboyant performer’s release became the soundtrack for the launch of the St.Kitts-Nevis Carnival 2011 as excerpts from the track was officially launched as the SUGAR MAS Jingle which was premiere at the launch of Sugar Mas 2011/2012.

Her track is the first official release for Sugar Mas Carnival 2011.

“Last year I released an album which received very positive feedback and reviews. High for Carnival was not only a huge local hit for me but it was relatively big regionally as well. It was featured on a number of soca compilations and reached number 1 on a number of soca charts around the world,” said Shakki

Shakki said “I expect much more with this song . So I am very excitied about the possibilities for this carnival and beyond.,” “ I intend to release 3 singles for this years carnival and if everyone thought last year was hot then I could guarantee them that this year is going to be Plenty Hotter,” the Soca Diva continued.

The former St.Kitts Soca Monarch and Nevis Culturama Queen indicated that the other two singles will be released leading up to the start of the 40 days of Sugar Mas on November 25th .

Please find below the first release for St.Kitts-Nevis Carnival 2k11 as well as the official Sugar mas Jingle