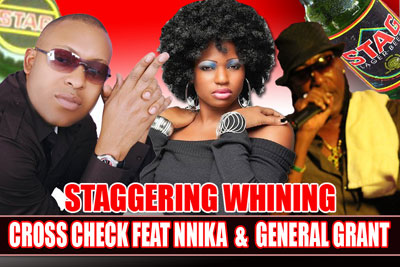 Big tune mashing up the soca scene it's time for a new dance the "Staggering Whine."

With 2k12 carnival right around the corner this one's dedicated to my Stag drinkers so grab on to a woman and hold that drink tight it's a new tune Cross Check featuring Nnika Francis and General Grant "Staggering Whine." This year we going for goal "Staggering Whine" taking groovy, we staggering on the road from sun up to sun down, from jouvert til we cross the stage drink, stagger and drift.

Request it on all your favorite radio station. We staggering whining!!!!