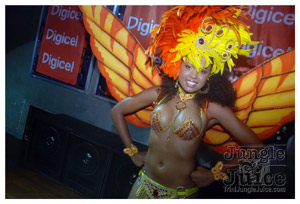 For carnival 2012 Legacy will take you all on a flight to the world of flying beings: ‘birds, butterflies, angels, fairies, mythical creatures and any other creature that has the ability to soar freely over the earth.’ The theme was inspired by the experience on a ride at a theme park abroad… very interesting… Also quite interesting was the band launch held in club Katalyst. 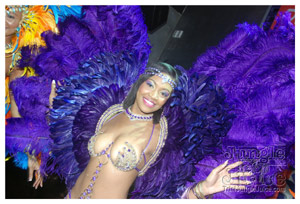 Most of launches I have experienced were held outdoors but Legacy was original and had to become creative with the presentation of the costumes as there was no proper runway to present them to the public. It was challenging, as the models walked through the dance floor and ended up on the small stage on the outside deck. Patrons were lined up along the walkway to view the costumes. The only disadvantage of this set up was limited possibility to see the whole costume from head to toes. The organizers made sure that media was able to get proper shoots of the costumes during media presentation, so go ahead and take a look at the pictures. 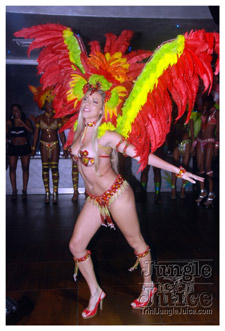 As for the party side of the event? The vibe was nice, the place was packed, the music was very danceable from old soca, new soca, dancehall to old classic reggae tunes, very good selection…. The night turned out to be the success. TJJ was there till the very end until, as most of us got used to this picture already, the Police came down to make sure the dj plays the last song… We might be Legacy’s flying creatures but we can’t escape the curfew…

Did We Forget Anything ?? Leave Your 2 Cents Below