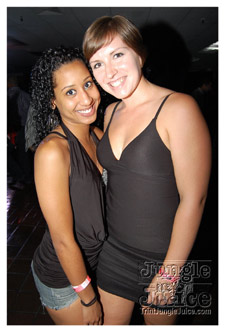 So another year....Joy Juice had the pleasure of covering Isle of Rhumb's Black & White. In the past few years...there were mixed emotions about the venue, the vibe, the crowd...etc. Well TJJ followers, though there were a couple things that they fell short on, there was no mistake, that Black and White 2011, was indeed one of the best events for Miami/Broward Carnival. Whether you wanted a stiff drink or something soft, whether you chose to wined down low or stood up for your session, whether you were more of a DJ type of guy or gal...or you are a rhythm section lover, whether you wanted a hot doubles or a bake and shark, whether you were a Blaxx fan or a Benjai supporter or whether you preferred Iwer's 'Bottom in de Road' tune...to his 2011 hit 'Come to Me'.....whatever your liking...Black & White had it all. They even had Trinijunglejuice there to bring you the coverage. You can easily say that Isle of Rhumb had everything!

CROWD:
The one thing that Black and White has had over the years is 'Good Will.' They have had a steady crowd for the past 4 years. We know this because we have been there every year. This year was obviously no different. The place was packed. The women were stunning in their well selected outfits...and the guys.....definitely thought about their wardrobe, knowing the quality of women that would have been there. 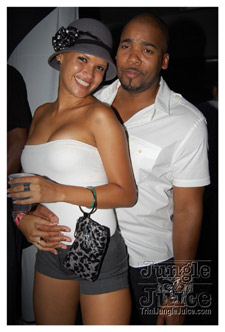 VIBES:
This is simple....Benjai, Iwer, Blaxx, Back to Basics, Sound Rev, Trinidad Massive Rhythm Section, beautiful women, food and drinks.....need we say more? Well...just a little bit. The vibes was ideal for a rainy night. Iwer in his usual fashion...mash up de place.... He was preceded by Benjai and Blaxx..both whom captivated the crowd. Everything else was icing on the cake.

FOOD & DRINK:
The menu was good... They had a bit of everything - roti, hot doubles, bake and shark, bake chicken, fried rice, lo mein...and the list goes on. As for the drinks, well the promotion's name is 'Isle of Rhumb'! Duh.... The bar....I'm sorry...the Bars...were well stocked. There were at least three large bars that favored everyone. If you were a beer drinker...there was a special bar for you. If you were a mixed drikes type of person, there was a bar for you. The locations of the bar also determined where most people hung out. Very thoughtful of the promoter. Great job on the bar. The only thing is that I would do my best to not run out of ice.