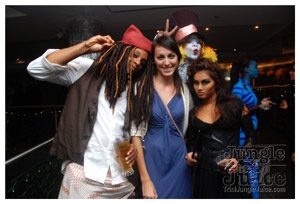 The Digicel IMAX® theatre is located at One Woodbrook Place and boasts of the largest  screen in the Caribbean with a 40x70 screen and seating for 364 patrons. It is known for its laser aligned surround sound, crystal clear images and immersive 3D quality.

That in short is the reason why TJJ likes to go back to Digicel IMAX® theater. This time we were invited to Digicel IMAX® Gala which was a formal celebration of theater’s opening, its success and future achievements. Greeted by costume dressed figures and mingled with resemblances of movie characters from films like Harry Potter, Spiderman, Pirates of the Caribbean and many more. The gala was mainly attended by ministers of government, leaders of corporate Trinidad and Tobago as well as prominent personalities of all the IMAX sponsors like Digicel, Carib, Atlantic, Ansa Automotive and First Citizens.

Once again treated to delicious cutters and drinks of choice the event was mainly focused on networking and ensuring that everyone is able to eventually experience this amazing 3D picture. Yet once more we were able to hear the inspiring story of Brian and Ingrid Jahra, the couple who brought IMAX to Trinidad and their experiences with financing it and building the theater itself. While Chief Operations Officer of Digicel Limited suggested that ‘Innovation! Firsts! Best in Class! Added value!’ are the foundation blocks that connect Digicel to the IMAX brand.

The audience was presented to awards wining documentary movie ‘Born to be wild’, the story about orphaned orangutans and elephants in Boreo and Kenya that are nurtured by people who sacrificed their lifetime to help them.

Nevertheless, that is not the only type of movies that IMAX offers. Now playing ‘Real Steel’ and soon to come is ‘Puss in Boots’, also offering to watch extended version of ‘Avatar’. I bet this must be some extraordinary experience!!