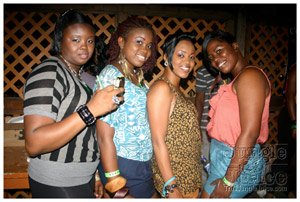 Waist, waist and more waist was the trend at the Bmobile Soca Spree VII Launch Party held at Barcode restaurant and bar.  There was no better way to celebrate the night before Divali than to jones an wuk up until the sun came up and no one better than the big man himself, Lil Rick.

It was the barbadian super star’s first time performing in Tobago and I’m guessing that he’s counting down the days until the next visit. Even with a fractured right leg, he couldn’t resist the challenge posed by the bago girls who told him that they knew how to wuk up. I don’t know who enjoyed the performance more, him, or the girls that helped...

After sweating up a storm Lil Rick introduced to the stage his fellow islander Inches, who, famous for his soca hit ‘Jiggle It’ made no hesitation in demonstrating how this infectious tune could get any girl’s waist to loosen in an instant! After dropping a taste of his new hit he was joined by the King himself Shurwayne Winchester. He joined in with Inches to remix the jiggling hit and shut down the show with a none-stop barrage of waist. The wining didn’t stop, the speed just change with the song.

All in all it was one hell of a way to start building suspense for Bmobile Soca Spree VII, the fact that it’s not until January only means more time to learn how to WUK! . Promoters, BWV entertainment alongside the main sponsor AVT General Services really had the right mix for this event and with its well stocked bar aside, B was definitely the place to be. Last but not least, mad props to DJ Mighty Krush who had the vibe like putty in his hands for the entire night.
Until the next big thing on the little island,Bago Out.