(New York, NY. November 8, 2011). The OCEAN Style/ATL Celebrity Golf Invitational teed off under beautiful conditions at the Cinnamon Hill Golf Course in Montego Bay on Saturday November 5. With Hole in One prizes of US$1 Million, a Land Rover LR2 and an Audi A1, not to mention a flat screen LCD TV and gift cards, up for grabs the field was eager to swing things into action. 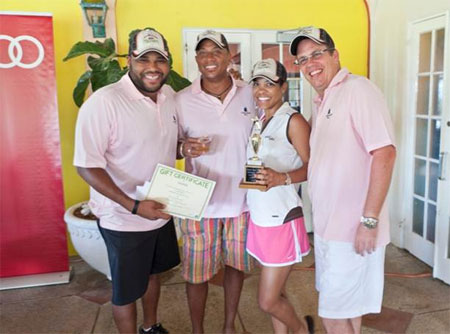 After a lovely day of competitive and fun golf, across the manicured fairways and true greens of Cinnamon Hill it was Team Appleton Estate with a score of 43, comprised of Appleton Estate executive Tanisa Samuel, Jamaican hotelier Deryk Meany, Atlanta based dentist Damien Grant and actor Anthony Anderson who stood atop a narrowly separated leaderboard.

Former Olympic sprint champion, and part of the defending team, Donovan Bailey was forced to watch the victors take hold of the title he and his team had come to defend. Finishing behind Team Appleton Estate were the foursome of Frank Sondern, Martin Francis, Ian Fulton and Jake Becker with a score of 44. Third place was claimed by Team Just Bet which was comprised of John Brennan, Tommy Smith, Nigel Davey and Dr. Arscott who finished with a score of 45.

“It was a fantastic event from start to finish. The players raved about the course conditioning and the overall organization of the event. We look forward to hosting again next year.” - Cinnamon Hill Director of Golf, Robert Ames.

Kids from The Sandals Foundation had the opportunity to get some putting lessons and also to meet some of the celebrities, including Project Runway Winner Anya Ayoung Chee.

OCEAN STYLE produces OCEAN STYLE TV and OCEAN Style Magazine with a mission of using television, print and web, to show the world the rich, fabulous, and engaging Caribbean life. OCEAN STYLE TV is a 30-minute show comprised of a worldly mix of travel adventures, runway showcases, event and fine living features. The show is broadcast to 28 islands, 3 continents and over 85 million households across a number of different markets that include the U.S., Caribbean, Europe and North Africa. OCEAN Style Magazine blends the finest in fashion, beauty, food, luxury travel and entertainment with engaging features and profiles of designers, artists, tastemakers, and celebrities to showcase the good life to be had in the Caribbean. For more please visit www.oceanstylemagazine.com