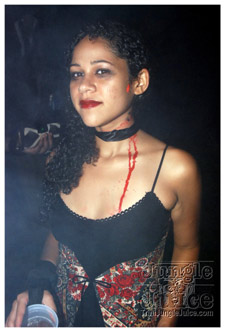 So it's the weekend before the coveted Halloween celebration, and where does the Jokey one find himself? On Cipriani Blvd that's where. Now I honestly don't really fancy costume parties but something told me this one would be different so I just by two things; the venue being Aura because this venue has begun bringing in some fresh and trendy ideas....and the name of the event, which was Nightmare On Cipriani Blvd. Now let's see if this this party was actually a fantasy, or did it really turn out to be a nightmare. To the review!

As I walked towards the very sexy door attendant, just the outdoor decor had me in awe. From cobweb, to skulls, to night lights and glow sticks.....these people really are good. One thing though, I did find myself wrestling with some cobweb on entering  the venue. Guess they didn't cater for some taller folks, but oh well, it's all good in the hood, or should I say boulevard.
The whole Aura nightclub was transformed into a dark, smokey, vibrant and spooky meeting place, and I enjoyed every second of it. Everywhere you turned there was someone in costume, whether it be a gritty and grimey ghoul or classic vampire, or even sweet nurse or school girl, or smart and sexy scientist....they were all there. Well I came as Jokey Juice. Who is he you ask? Defender of the Juice, stronger than a bachac, quicker than a snail on a banana peel and have more lyrics than the last two pages of the Showtime newspapers. 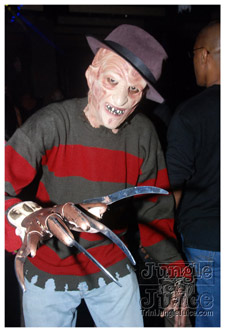 Other than myself some didn't come in costume, but they were considered characters from the hit video game ""The Sims"" where you are yourself. So you see there really was something there for everyone.

One issue I had, which was with the music. Now seeing that it's a costume party, I did expect a little more versatility from the DJ rather than just playing a lot of new school music and really playing safe with the memorable tracks. To be honest, I only heard Thriller once the whole night. Boohoo!! But nevertheless, it was a great party. I guess the Jokey One after this event will have people dressing like him at other events.

Must say special thanks to all Jus Pink Entertainment committee members for the invitation, and to my homey Katrina Geetoah. You looked fantabulous in your bunny suit by the way. Jus Pink, we expect great things from you all moving forward, and you know the TJJ family will be there to show the world what you all are capable of.