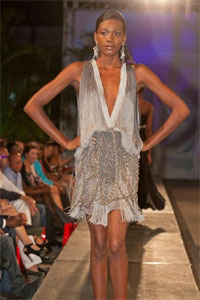 (NEW YORK, NY – NOVEMBER 11). -- This past weekend featured the much anticipated OCEAN Style FashionShowcase. Presented by Land Rover and Range Rover with platinum sponsors Appleton Estate Jamaican Rum and Sandals Resorts, the event was a star-studded, glamorous affair that brought the well-heeled from all across Jamaica to the ATL Automotive Showroom in Montego Bay.

Adam Stewart, CEO of Sandals/Beaches and Deputy Chairman ATL said of the event:

The ATL Group was proud to be the presenting sponsors of the 4th edition of the Ocean Style FashionShowcase. The evening was exciting, fun and sexy; the perfect way for ATL to unveil to Jamaica Motor Trend’s 2011 SUV of the Year, the Range Rover Evoque! We thank Douglas Gordon and his team for all their hard work and staging this amazing event.”

The evening of high fashion was enjoyed by the invitation-only crowd who included guests that had jetted in from Los Angeles, New York, Atlanta, Toronto, Miami and Trinidad and Tobago.

The evening’s festivities began with the presentation of the Foundation Award to the elegant Novia Mcdonald-Whyte. Presented by Trinidadian designer Meiling and the Jamaica Observer’s CEO, Ed Khoury, the award was given in recognition of McDonald-Whyte’s “tremendous efforts, great accomplishments and lasting impact on Caribbean Fashion.”

The award was followed by the spectacular unveiling of the Range Rover Evoque when Adam Stewart, with Trinidadian designer and Project Runway Season 9 winner Anya Ayoung-Chee alongside, drove the widely heralded and captivating vehicle into the middle of the runway.

There was a solo performance by Jamaican vocalist Alisa who gave a stirring rendition of Adele’s Rolling in the Deep which left guests wanting much more, but it was time for fashion. 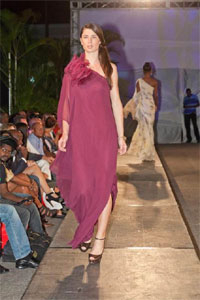 The fashion show opened with Jamaican designers Sandra Kennedy and TnT Fashions, presenting all-white resort collections. Sandra Kennedy showcased beautiful white crocheted dresses and swimsuits by Ayanna Dixon. This was followed by menswear from Sophia Max-Brown Boutique, featuring Hugo Boss and Calvin Klein. The main fashion segment followed with a selection of evening wear from a host of internationally acclaimed designers including Alberta Ferretti, Tadashi Shoji, Harve Leger, Badgeley Mischka, Reem Acra, BCBG/Maxazria and Catherine Malandrino. The show was styled by Kathryn Talapados out of New York, assisted by Cayla Hutton with production assistance from Norwayne Anderson of PUSH Management out of Toronto. The models came from Jamaica, New York and Toronto from a number of different agencies, including Saint International, Pulse and PUSH.

After the show guests and media alike rushed to the Range Rover Evoque which until that point remained tantalizingly close but untouched before heading to the After Party held in an air conditioned 80 foot tent, spectacularly decorated by Paulette Henry where guests partied until the wee hours of the morning.

Appleton Executive Tanisa Samuel, a platinum sponsor of the FashionShowcase Weekend was thrilled about the event and excited for what’s to come:

“Appleton Estate Jamaica Rum is proud to have partnered with Ocean Style for this incredible fun filled weekend. Ocean Style Editor in Chief Douglas Gordon, is a visionary who’s made fashion fun and accessible while creating a fashion destination out of Montego Bay. It’s always a pleasure working with Douglas, and we look forward to a bigger and better 2012!!”

Ocean Style has posted photos from the weekend on their Facebook page. You can visit www.facebook.com/oceanstylemagazine to view the images.