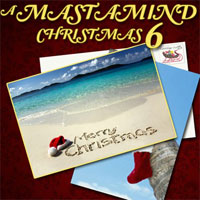 In a world that changes trends and tastes faster than one can blink a fake eyelash, Christmas remains the one time of year we all hold steadfast to tradition. For the past six years one production team, comprising of Natasha Andrews-Noel and Shawn Noel, has been giving parang lovers a musical anchor in West Indian Christmas tradition in their Christmas Parang Compilations. 2012 is no exception. According to Natasha, co-owner and managing director of the team, “This year we have been getting calls from our regular customers wondering why the new album is not already in stores. We are currently running a little behind schedule. I suppose after 6 Christmas albums with 5 of those celebrating the tradition of parang, people have come to expect their Mastamind music for Christmas.”

The demanding fans can finally rest easily as A Mastamind Christmas 6 is currently available digitally on TrinidadTunes, itunes, Amazon and all other digital stores for their convenience. For those who prefer a hard copy, cds will hit stores on Wednesday 16th November, 2011.

As to what we can expect this year, Shawn, who produced and composed all of the music in addition to playing each instrument on the album says, “We got a lil spicier this year. We want to keep the tradition alive but inject flavour and life into it to keep people dancing and enjoying every note of it.”

With already popular hits like the Cuatro Man Riddim that features Rembunction, Ajala, Ricardo Drue, Chai, Kool and Da Ma$tamind, and the much loved single, Ah Coming Dey by Eddie Charles, this album has sugar, spice, and everything to keep all parang limes nice.

Also included in the mix is a sumptuous selection of well-known veterans beside some lively young artists, who all combine to give a very enjoyable musical buffet. With individual tracks by Poser, D’Chancellor, Natasha Wilson, Leon Coldero, Young Voice, Skhi, 3rd Bass, and Grenada’s Junior Blood Fire, this 6th album has the vocal power to continue the highly regarded Ma$tamind annual parang custom.

In addition, following in the footsteps of the modern Christmas classic, Black Cake and Sorrel, which is still fervently played on West Indian radio stations everywhere, the team gives us another Christmas instrumental piece to fall in love with. The track is titled Ginger-Beer Jam, and promises to be as infectious and harmonically captivating as its predecessor.

For many of us change has been the only constant in this fast paced 21st century life. How remarkably wonderful it is then, to be able to depend on the Mastamind team, to continually remind and root us in the one genre of music that accurately defines every West Indian both far and near, come the 25th of December.

Be sure to pick up your copy today!

Link to Album: A Mastamind Christmas 6