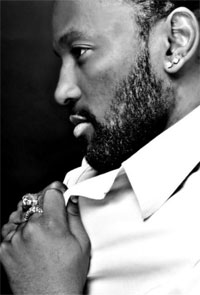 It was in 2005 that Scrappy has been working the soca scene with a series of songs ranging from groovy soca, traditional calypso, reggaeton, ragga soca and zouk, among other genres. The Trinidadian born, Montserrat-bred soca artist has been flying the Montserattian flag on various platforms and has graced numerous stages in London, Berlin, Amsterdam, Holland, Toronto, St. Lucia, Antigua to name a few.

Scrappy who is a producer and songwriter, manages his own label Johnson Music Production.

He has worked with producers such as White Wine, Soca Child, Chronik X, Kerwin Du Bois, Junez Productions and Dj Shaker with many more potential tracks to come from well established producers in the soca arena. His accolades range from 2005 Road March and Soca Monarch in Montserrat, 2009 SMA's Best UK Soca Track as well as his latest being the 2011 Calabash Awards Best Soca Artist. The artist who to date has released his 5th studio album titled S.O.C.A which is available on itunes has put things into extra gear and has made his contribution to the 2012 Carnival season in what we consider as the mecca of soca, Trinidad and Tobago. His two tracks are titled

Put Dem Up - An uptempo track which is calling on anyone from every nation to put their flags up to represent where they are from.
Produced by White Wine
Written and Performed by Scrappy

Slow Wine - A groovy track with melodious vocals and a very soothing hook which will definitely be pounding the airwaves for the 2012 season.
Produced by Junez Productions
Written and Performed by Scrappy

Scrappy has his own cellphone app available on Android phones only.

iphone and blackberry coming soon. Go to the android market and search “Scrappy”