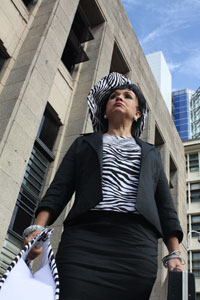 Monday 21st NOVEMBER, 2011 (PORT OF SPAIN, TRINIDAD): Tony Hall’s acclaimed new play featuring Cecilia Salazar – Miss Miles: the Woman of the World – returns for a record fifth week in Port of Spain this Friday 25 – Sunday 27th November at the Little Carib Theatre. This will be the final run in Port of Spain for 2011. Heralded by audiences and critics alike, the overwhelming public response has promoted not one but three extensions of this celebrated and provocative local play. The show has played to standing-room-only audiences and nightly standing ovations since premiering at the Little Carib on 20th October. Critics and audiences have celebrated the timeliness of this historic new play, which follows the life and tragic death of a true Trini patriot, activist and whistle-blower Gene Miles. Those who knew the dynamic and colourful Miles have praised Salazar for her sensitive and masterful portrayal of this Trinidadian heroine.

This tour-de-force one woman-play, Miss Miles – the Woman of the World is written and directed by veteran actor, playwright and director Tony Hall and features the awardwinning Cecilia Salazar as Trinidadian activist, singer, fashionista and public servant Gene Miles. The play focuses on the clash between Gene Miles’ conscience, religious faith, belief in truth and the rigid pre-set notions of the status quo. The story traces the 42 years of this attractive and intelligent woman's short life – from growing up in preindependence, colonial, Roman Catholic Trinidad, attending St. Joseph’s Convent (Port of Spain), to the black power days of the early 1970’s, when a struggle to develop a new and just society gave rise to social transformation.

Gene Miles, a Trinidad and Tobago patriot, took on the powerful state administration in an anti-corruption campaign, The Gas Station Racket in the 1960s – and paid the ultimate price. It is perceived widely that she stood up for high standards of morality in the public service. She caused a commission of inquiry to be launched into what became known as the “Gas Station racket”. But along the way “Gas Station Gene”, who was rumoured as having an affair with the People's National Movement minister of government John O'Halloran, lost her job, became a nervous wreck and was often seen wandering the city of Port of Spain, bedraggled and drunk. She died of a heart attack at 42 years old. 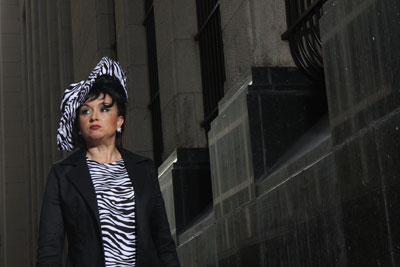 ABOUT LORDSTREET THEATRE COMPANY:
Apart from building plays for street, stage as Lordstreet Theatre Company - LTC and screen as Lordstreet Pictures and the digital arts recording studios of Vengeance Media, Lordstreet also provides media and communications services to organizations on the islands and location, casting and production services for film, video and audio projects in the territories of the southern Caribbean. Vengeance Media, a digital recording arts facility, was started by Mauri “KeKere” Hall as A Tobago Music Project in November 2006. In 2010 he opened a sister Vengeance Media studio in Toronto Ontario and Wolfville, Nova Scotia, Canada. Lordstreet also co-ordinates the activity of the Jouvay Institute and a Playwrights Workshop.

PHOTOS (ALL BY RODELL WARNER)
Cecilia Salazar, next to the Treasury Building in Port of Spain, portrays the inimitable Gene Miles.