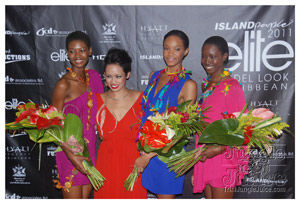 "Beauty is in the eye of the beholder" this saying definitely speaks the truth, also without doubt the ‘beholders’ present at Elite Model Look Caribbean 2011 finals have experienced some extraordinary beauty. It is amazing how this kind of events not only showcase the beautiful models in glamorous outfits but also the patrons show up in full glamour effect. The event was just pulsing with beautiful people and prominent personalities.

Elite Model Look is an international model search with a reputation as glamorous and high profile media event. Elite Model is organized all over the world and this time it was brought to Trinidad to host a selection of 3 girls, the representatives of the Caribbean as whole. After casting 9 Caribbean countries and selecting 2 girls from each island, 21 Elite Model Look competitors found themselves on a journey to win all-expense paid trip to China to participate at the World Finals in November 2011 where they will have a chance to compete for US$325,000.00 in modeling contracts with Elite Model Management over a period of 2 years. The prize is impressive and even more of a value for girls in the age between 13 and 20. Great start of bright future…

Not only models went through tough moments of competition but also the judges themselves had to face difficult task of making the right decisions. And they did succeed after seeing all 21 girls on the runway in swimsuits and resort wear from the designer Peter Elias. The tension was on when the hosts went on to present selected 10 of the competitors who once again walked the runway, only 3 girls made it to the top and will represent the Caribbean in Shanghai, China in December 2011.

The hosts for the evening were: hilarious and charming Yendi Phillips, Jamaican Fashion Model and First runner-up Miss Universe 2010, who accompanied by Road March winner 2010, Jason Williams created perfectly entertaining host couple of this glamorous event. On top of this, Trinidad’s soca star and the winner of Groovy Soca Monarch 2011, Kes, performed two of his hit songs: ‘Where you from’ and ‘Wotless’.

We would like to congratulate all the models who made it so far in the competition and wish best of luck to the 3 finalists. Let your beauty shine !!