By Kyle W. aka Bago Juice
Published on 29-Oct-11
Boo! Did I scare ya? No? Well neither did the Haunted Hut at The Shade. (Maybe it’s because it’s such A Cool Scene.) However, what ‘Spooky’ the Halloween party lacked in screaming from horror, it made up for in, well, screaming like a ...
>> View Spooky: A Halloween Party Gallery 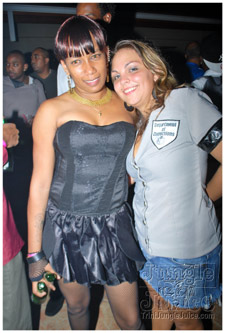 Boo! Did I scare ya? No? Well neither did the Haunted Hut at The Shade. (Maybe it’s because it’s such A Cool Scene.) However, what ‘Spooky’ the Halloween party lacked in screaming from horror, it made up for in, well, screaming like a crazy person having one hell of a night! Contributors to the never ending vibes included : Air brushed table dancers, free Shade Shots before 12, drink specials on bottles of Jonny and Nuvo, Top Djs on the isle and a random Tasa man...I’d continue but I can’t remember that far back!

Now I’ll admit, even though nothing was really ‘scary,’ there were a few costumes that definitely caught me off guard, like the hazmat guy and the grim reaper. More importantly, there were those that were too sexy to be scary, like the dark angels, the wicked witch if the west, Little Bo Peep (who definitely wasn’t looking for her sheep) and the vampire girl who made me feel like I was watching True Blood.

Believe it or not there were those who probably didn’t want to scare the normal bago folk so they only went half the way on their costumes, like the joker from The Dark Knight and the killer from Scary Movie. (Who must have had a pretty wild night considering that the last I saw of him was his mask in the urinals...) There were a lot of persons who simply didn’t feel the costume vibe and instead, just came out plain swanky! Oh, and did I mention the random Tasa man? We don’t know who he was or where he came from, but he definitely kept the vibe pumping.

To be honest, it didn’t matter what you wore, because with the good food, good drinks and the good vibes that The Shade provided, a good (and possible hard to remember) night was sure for all.I was pretty bummed that nobody came dressed as the Box head guy from the”Sexy And I Know It” music video, but what can I say, maybe we’re not ready for the wiggle dance in all its magnificence...