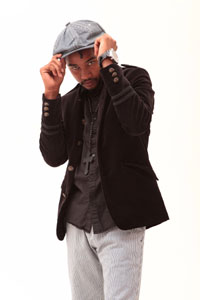 Port-of-Spain, Trinidad. December 12, 2011 -- Blazer Dan is gone but will never be forgotten. In fact, so strong was the late artiste’s impact on the music industry of Trinidad and Tobago that his spirit of determination and musical pride has manifested itself in his brother. The world will know Ark Angel. He’s the younger brother of Troydon ‘Blazer Dan’ Cruickshank and as 2012 comes into focus, so too will Ark Angel.

With an undying desire to fulfill his brother’s musical legacy, the Chaguanas native is releasing a single for the C2K12 season called, Show Wine. “I know my brother was no saint but that’s between him and God,” he said, adding that despite the negatives that Blazer’s name had become reputed for, his personal aim was to better the legacy of his brother by continuing with the production of music that would last a lifetime. “Despite everything, I know everyone would agree that where music was concerned, Blazer was a genius. He taught me a lot and I intend to make him, my family, my Enterprise neighbourhood and my country, very proud,” he said.

Having been compared vocally to his brother by many, managers Kern Rose and Marlon Grant are excited to place the budding performer into the Soca market. They have noted his bravery and determination to perfect the art form and with that in mind, they are pushing forward to ensure that Ark Angel finds a unique place in the soca industry. The single, Show Wine was produced by Julio Nelson and is carded for release in the days ahead. According to his management team, a lot is being done to professionally market the young entertainer. “We’re focusing on producing a lot of music videos and we’re doing some web blogs along with a lot of other strategic marketing methods aimed at building a strong fan base for him,” said Rose. He is confident that Ark Angel will make a mark on the industry and so he says that both he and Grant intend to push for Blazer’s baby brother.

The artiste too, is ready to show just what he’s capable of and so with a brand new track set for release, the world will soon hear the sweet sound of Ark Angel.