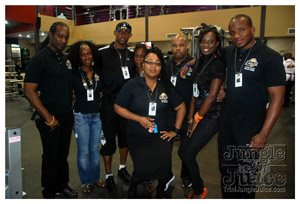 Central Trinidad gets a Super Gym

Trinidad– The evolution of fitness has arrived and is destined to alter the local perception and approach to the concept of exercise in a colossal way. This change comes in the form of the revolutionary centre “Central Athletic Club” which promises to be more than just a gym but to be a new, dynamic, all encompassing fitness hub unlike anything Trinidad and Tobago or the Caribbean has ever seen.

Based at #6 Maraj Street, Montrose, Chaguanas, Central Athletic is the brainchild of businessman and fitness enthusiast Michael Nicholas. Nicholas is a native of central Trinidad and grew up in Canada. Upon returning to T&T a few years ago he embraced the gym lifestyle, admittedly due to the results of his love affair with local cuisine. Since then he has worked out in various facilities both locally and in North America and has now harnessed this range of exercising experiences to bring forth a world class athletic centre for the Trinbagonian market.

Nicholas shared “In developing Central Athletic I wanted to create a gym that encompasses a complete environment to cater to everyone regardless of their work out preferences or schedules. I designed this place for everybody including corporate employees, athletes, housewives and the of course the family unit and my vision was to make it non-momentous, non-restrictive and multi-dimensional”. 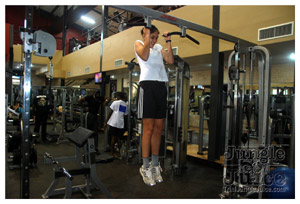 Most notably, Central Athletic features a built-in cinema with a variety of cardio machines, giving members the opportunity to burn calories while watching their favourite Hollywood blockbusters. According to Nicholas, “You have the full effect of being in a movie theater while getting a good workout. I was in there the other day watching Transformers and completed 45 minutes on the treadmill with ease”.

With a spacious, modern-themed facility complete with day-care and 24 hour security, members of this fitness centre will have the opportunity to choose from including 30 different classes and the chance to build their own, fun exercise regimen. As Central Athletic aspires to add new aspects to its arsenal such as therapeutic ice baths, Carnival boot camps and kids fitness programs, the highly trained staff emphasizes that a high level of customer service will be a major factor in the organization.

There are future plans for Central Athletic to expand its facilities to Port-Of-Spain, San Fernando, Tobago and possibly other parts of the region. When asked about why this ‘game-changer’ in the local gym industry was positioned in central T&T, Nicholas (a proud son of Chaguanas) said that the fitness centre was placed in there not only as his way of giving back to his community but because he firmly believes that Chaguanas is the fastest growing city in Trinidad.

Cass Stuart was there for TJJ