By TJJ Admin
Published on 16-Dec-11
Port of Spain, Trinidad (December 16, 2011) - Destra Garcia, The Queen of Soca, has launched a multi faceted online marketing strategy aimed at taking soca music to the world. This includes a new look to ... 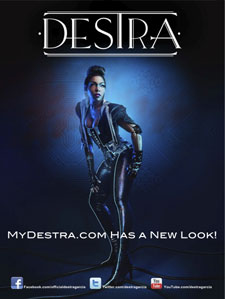 Port of Spain, Trinidad (December 16, 2011) - Destra Garcia, The Queen of Soca, has launched a multi faceted online marketing strategy aimed at taking soca music to the world. This includes a new look to her popular Web site www.MyDestra.com, which hosts the latest news and information about Destra for Carnival 2012 and beyond. Her 360 degree online approach includes activity on the popular social media sites such Twitter, Facebook, and SoundCloud.

Destra is no stranger to Twitter, where she currently has over 11,000 followers, and Facebook where she has an impressive fan base of over 50,500. She is committed to communicating with her followers on a daily basis via these mediums through dynamic posts covering topics such as new releases, current affairs, fashion ideas and last but not least, her plans to take soca music to another level.

In addition to Facebook and Twitter, Destra is ensuring that she reaches all potential fans through multiple avenues. Her SoundClound tracks have received thousands of plays in only a few weeks and have received international attention from fans as far away as Japan.

Destra passionately describes her new social media strategy as her way of keeping in touch with and ‘keeping it real’ for her fans. “The Web site, MyDestra.com is really something I wanted to revamp for my supporters and the potential fans out there. I wanted to give them relevant and genuine access to me, my music and my world. I am also reaching out on Twitter and Facebook in ways that I have never done before and as a result, my fan base is steadily growing. This is my way of showing that I am listening and communicating on a daily basis and that I appreciate all the support that has been given to me over the years. Also, through YouTube, iTunes and SoundCloud I am working on getting my music and by extension, the entire genre of soca music the international recognition it deserves”.

A few of the new Web site highlights are:

Destra is looking forward to Carnival 2012 and is ready and rearing for a great season. She has released several hot tracks which are making strides on the airwaves such as, the November release “Keep on Wukkin”, which was followed closely by two collaborations - the first titled “De Baddist’” with Kerwin Du Bois, followed by “Pania”, a duet with the 2011 Chutney Soca Monarch, Rikki Jai.

Destra Garcia, born in Trinidad, has grown from strength to strength since her 1999 debut and the entertainer is showing no signs of slowing down — challenging herself every year, taking her music and her fans along for the exciting journey. Her music has proven its staying power and its ability to captivate multiple markets.

For the past five years Destra has won many awards and accreditations some of which include 13 Soca Awards and five COTT awards, three of which were best female songwriter from 2004-2007 and best pan song 2006.

She remains the most requested female Soca artist of the Caribbean and the world. In 2008 Destra released her fifth album which was a compilation of 2007 and 2008 songs which features collaborations done by world famous Jamaican artists; Free it Up with Sean Paul, On the Floor with Vegas, Wine It and Saddle on the Banjo Riddum. Destra is currently working on her new album, featuring single ‘Keep On Wukkin’.