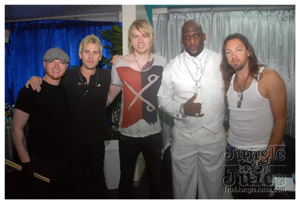 Extraordinary is not enough to say. This event was a stamp on the history of Trinidad’s music scene. Both, for its’ unique heavy rock character and for the actual mix of genres on one stage, on the same night. The line up was full of variety including local rock bands like 5 Miles to Midnight, hip hop artist like Mark Hardy, soca stars: Kes and Machel Montano to finally local rock stars Orange Sky who were actually an opening act for the highlight of the night: Lifehouse and Evanescence. Not to forget amazing Jamaican reggae star Stephen Marley and his excellent performance.

All these sophisticated internationally known names in Trinidad’s Hasley Crawford stadium! Adding a bit of spice to the list of the top artists like Maroon 5 and Beyonce who visited Trinidad in the past.

Let me elaborate a bit on organization skills of the promoters, Star 947. I absolutely would like to congratulate on meeting the expectations and standards required by such excellent line up. The stage set up was proper,  the general admission section although being so far away from the stage could at least enjoy the view on the big screens set up for them. And most importantly stage time management, for trini reality is breathtaking experience to actually see all the acts on stage in planned time. 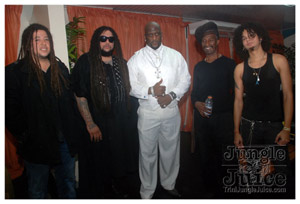 So here comes the time to talk about the concert:

Whether you like rock or simply tolerate it you couldn’t deny that the show by Lifehouse was excellent. Just for the sake of good performance. No surprise here, they are internationally recognized band with standards and you can definitely see it in action.

The crowd helped them to feel at home and excited to perform as they expressed their appreciation many times. 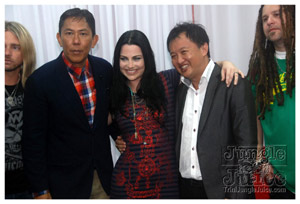 Evanescence. The show directed to perfection including visuals and stage lighting. Here again, even if you don’t like this band and heavy rock, you could enjoy this show just for its’ perfection and energy.

But definitely trini crowd was fully prepared for this occasion and enthusiastic screams of the fans could be properly heard even though the stadium was not completely full. Evanescence truly has some faithful fans in the country who were by the stage singing along all night and also were appreciated by the band. The vocalist, Amy Lee, eagerly expressed her gratitude to be able to perform here in Trinidad and being surprised as she said that ‘it’s hot in here even though it is December’.

The band promoted many new songs from their new album but the song that I believe anyone can recognize ‘Bring me to life’ closed off this magnificent show.

All in all, this event was worth time and money for anyone who can appreciate international standard of music performance. History in the making.