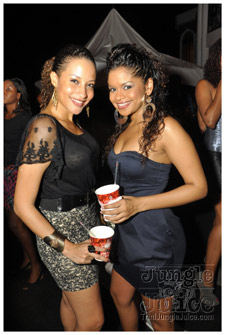 On Christmas night after yuh full yuh belly, it’s time to put on yuh fancy pants or frock and spray up the new perfume or cologne yuh get from Santa and hit the town. Apparently the place to be on Christmas Night was the new event Christmas on the Hill held at Lara’s house. Excited for the prospect of something new to do on Christmas night Trini’s headed out in their numbers, of course dressed to impress. The venue definitely set the tone for the beginning of the night as folks were on their best behaviour as they should be when they in people house. By the end of the night however, when the free drinks kicked in it was true Trini style bacchanal.

The ambiance was perfect for a Christmas night celebration with just the right touch of sophistication, enough dancing room and fully stocked, well-positioned bars. There were complimentary doubles and gyros on hand to keep people going after Christmas lunch finally digested.

The vibes of a Christmas night party is always a bit more special as people are generally in a loving and generous mood after a day of gift giving and receiving. Speaking of gifts, the promoters had a special gift for patrons, especially the men, in the form of a talented and flexible Argentinean exotic dancer. The young lady showed off her impressive skills while hanging by fabric from the top of stage. We are sure many of the fellas took Hoppy’s advice and invested in curtains for their bedroom after that display.

The entertainment didn’t stop there as Swappi later took the stage performing his hits including his infectious 2k12 offering Wine on DJ. Then the ladies got their gift in the form of a surprise appearance by Mr. Fete himself that sent the entire crowd wild! He performed a sample of his c2k12 selections that left his audience salivating for more. He then introduced upcoming soca star K-Rich who performed his hit “The Best” for the receptive audience.

After the performances the drinks continued to flow and some of the top DJs including   Dane and Private Ryan kept us pumping til the wee hours of the morning. We danced all night and even chipped down the hill into the shuttle cause the dance was just that good. We will be there next year for sure.