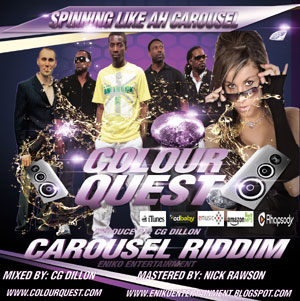 Brantford, Ontario - November 20 2011 – There has never been before so much anticipation for a release from a Canadian Island pop band. The fans demanded it, so they produced it and now the wait is over with the release of the first international single “Spinning Like Ah Carousel” November 22st 2011 from the #1 Island Pop band in North America “Colour Quest”. The track is an absolute scorcher and will defiantly burn up the clubs and airwaves. Ready, willing and able to deliver hard hitting music in the studio or on the stage “Colour Quest” will not let anything stand in their way. “Spinning Like Ah Carousel” will be available for download by November 22, 2011 on iTunes, Napster, Rhapsody, eMusic, CD Baby Amazon.com mp3 etc. “Colour Quest” is encouraging all promoters at large to start giving the Canadian artists a chance to grow and develop instead of bringing in all imports show after show.