Big Brother Nebula868 - Brent Anthony's Got The Sweetness To Share 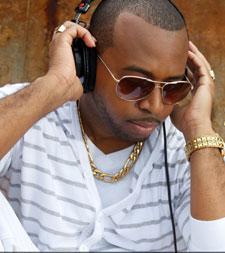 Port-of-Spain, Trinidad. January 9, 2011 -- He’s a looker- no doubt. He’s got the full package- star material actually, and so with that understood even by the artiste himself, Trinidad and Tobago’s newest carnival addition, Brent Anthony is letting it be known that he’s in for the long haul.

Anthony is the brother of local musical duo Nebula868. He said he was actually the singer in the family before the Nebula boys took over. As the eldest, Brent said he provided strong guidance for his brothers Sean and Wong which subsequently materialized into their highly rated sound. All the while though, Brent said he looked on, convincing himself that it was time for him to make a musical move- this, after some four years out of the music circuit.

Years ago, Bunji Garlin’s manager, Ian Pantin guided Brent to get involved in soca music. He said he had been more of an R&B singer, however with the push from Pantin, he soon recorded and delivered his first ever soca single, Girls All Over, which was produced by Darryl Braxton. From there, Anthony even entered the now defunct Ragga Soca Monarch competition and made it as far as the Semi-Final round. Four years ago, he had a follow up single called Shake It, alongside the late Blazer Dan. It was the last collaboration done by Blazer prior to his death. After years of being away, Brent Anthony is thinking of entering the Groovy Soca Monarch competition with his spanking new single, Sweetness in 2012. “The track is getting pretty good airplay in Boston and I’m hoping it’ll pick up her at home,” he said, adding that his music is marketed in the United States by a team of experts- On the Spot Entertainment, which has been linked to Jamaican vocalist, Sascha.

Born and bred in Arima, Trinidad, Brent Anthony is very happy about the new single. “It was written by Fojo out of Guyana and it was produced by Mark Walcott from New York City,” he said, further explaining that Nebula868 and Fojo were responsible for background vocals on the track. “Mark and Wong also mixed and mastered the track,” he highlighted, marveling over the fact that his brothers are as huge as they are in T&T and the Caribbean.

Brent says he is not about to stop that powerful momentum that he’s kicked off with in 2012. In fact, he says he has three singles to come after the Carnival season, one of which is a dance track. Added to that, it was only on Monday confirmed that Brent would be doing a collaborative single alongside Arima’s self- proclaimed, knight wonder of the world- Squeezy Rankin. “I want to make a difference in music- in the industry... in the world. I want to be known as somebody who brought good music and be known for that good music, worldwide. I know what I have to do now- keep working consistently, rising and recording music in order to make that happen. I will continue to be out there!” he guaranteed.