Karma 'Rises' to the occasion with Carnival 2K12 debut 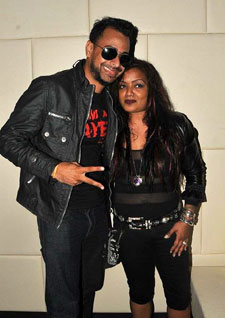 POS, Trinidad (Sonique Solutions) – Carnival 2012 is in full swing in the twin island republic of Trinidad and Tobago and the festival flood gates have been flung open by an onslaught of new music releases, social events and seasonal competitions. Nevertheless, the members of Caribbean music band, Karma have remained focussed on their objective to bring forth world class entertainment to both the Chutney and Soca markets. This was evidenced by the band’s recent performances this past weekend.

Last Saturday evening Karma ignited the Maracas Night Club (formerly Club Sting) at the event “Ravi B Saturday” where patrons were treated to a delightful mix of Chutney, Soca, Bollywood and Hindi classics. Although headlined by the former Chutney-Soca Monarch and his band mates, Ravi B Saturday showcased the talents of Chutney music’s elite with appearances by Drupatee, Hunter, Rick Ramoutar and Fusion, Rasika Dindial and Rakesh Yankaran. Much to the audience’s delight, this event also marked the first performance in 9 years from Holland-based Chutney superstar Ashni.

Karma made their presence felt the following day as they made their 2012 Carnival fete debut at the premium all inclusive “Xotique 2” held at the Rise in Chaguanas. The versatile crossover band brought the sunshine on a rainy day with a vibrant musical set which kept all in attendance ceaselessly jumping and waving.

Vocalists Ravi B, Nisha and Gregory had the younger members of the crowd moving to modern day Soca hits such as Kerwin Dubois’ “Bacchanalist”, Shal Marshal’s “Trouble” and the 2011 road march anthem “Advanatge” and pleased the more mature party goers with renditions of classics including The Mighty Duke’s “Thunder” and Colin Lucas’ “Dollar Wine”. Most notable on the Karma set was the overwhelming audience reaction to Ravi’s latest offering “Granny” which is currently heating up the nation’s airwaves.

The youthful, musically diverse Karma, which recently concluded a tour in Guyana is already booked for several events throughout this year’s Carnival season and beyond which includes more all inclusives, cooler fetes and major concert performances.

The band members have assured that fans can expect nothing less than supreme energy in this new year.

To keep up to date with Karma’s latest music and happenings log onto: http://www.karmaholics.com/