Last Call to get on board...with SW Storm 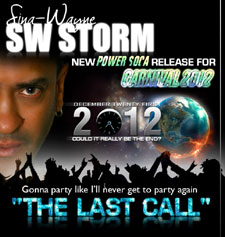 When you are named after a weather formation which sometimes causes devastation, you have no real choice but to live up to that name. SW Storm is back and ready to create another stir! Truly living up to his name, SW Storm has been creating quite a stir and is continuing the momentum for 2012 by adding to it a new Power Soca release; “The Last Call”

With so much hype and talk about 2012 being the end of the world, Storm says it’s the “Last Call” to love somebody, to jump up and mash up the party; get ready to celebrate. Like a true Trinbagonian, Storm plans to party hard like it’s the end of time.

One would have thought waving flags, wining low and jumping high would be as good a way as any to say goodbye to life on earth, but in this case it’s much more comforting to be skeptical. Storm however is taking no chances and rips and roars with the energy of a man who intends to destroy the dancefloor long before the big barman in the sky shouts “Last Call”; I know that is how many would want to spend their last day on earth and Storms’ 2012 offering is the perfect soundtrack.

Every year without malice or doubt, SW Storm pens brilliant lyrics accompanied by on point vocals and unique musical accompaniment. This year the London born, Toronto-based Trini has teamed up with ace producer Shawn “Mastamind” Noel of Mastamind Productions to create the powerful smash hit “The Last Call” with the hopes of leaving his mark once again. Storm has kept busy throughout 2011 with the launch of his own band “SW Storm &The Raw” which has been receiving rave reviews touring throughout Canada and the USA. According to Storm “I create music that is relevant and thought provoking, I give music lovers the music I know they want to hear..great music.”

As promised Storm continues to release quality music in and out of Carnival, look out for the SW Storm the Soca Ambassador during Carnival 2012 and beyond... The clock is ticking... Don’t miss this call... It’sThe Last Call to get on board... Don’t be left out!!