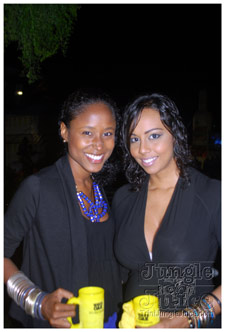 “A thousand dollars? Dey mad or what?” You’ve probably heard this or a similar version of it a lot this Carnival as partygoers are complaining about the rising costs of all-inclusive fetes this year. So when a FREE all-inclusive comes a long it’s definitely an opportunity not to pass up. Angostura has now become well known for their extravagant promotional events where they treat their customers to a night of complimentary drinks, food and performances. The event Kingdom of Rum was the latest installment of their invite only fetes.

The dance sell-off as they say, as it should because who would be mad enough to turn down an invite to a free all inclusive in the middle of carnival? The medieval themed event featured décor that included knights in full armor, wenches greeting patrons as they entered and an elaborate castle display with knights jousting on horseback. There was a full range of food that included Chinese, Indian, and Grilled food and we hear the ribs were bess.

The event made use of both the car park and inside of Space nightclub, which turned out to be a great idea when the rain started to fall. Inside the club, patrons were treated to performances by Ravi B, Nisha B, Iwer George and Destra who brought on guest performers Kerwin Dubois and Rikki Jai.

Angostura’s selection of rums was flowing all night and there were also special shots and a cocktail bar for those who wanted more variety. Free rum, free food, free performances what else could you ask for? We are sure everyone left satisfied that they got their money’s worth ;).