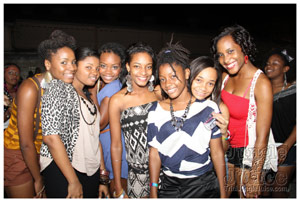 Celebrating the 50th anniversary of the schools existence is Francois Girls College with their Carnival All Inclusive Fete which took place on Friday 20th January 2012 at the St. John’s Hall in Woodbook, Port-of-Spain.

Lights, Cameras, Action ... let the celebration begin! To get patrons into the festivities Deejay music was played by Titan VCD and X-Caliber International. The night got swinging as DIL-E-NADAN with frontline singers Raymond Ramnarine, Derrick Seales and Candi Hoyte took the stage. Most people know them as a Chutney Band but with their slamming performance, singing a mixture of top soca, calypso and chutney songs  I will definitely say that this band has crossed over.
Mr. 4D himself, Swappi, had everybody bubbling. That Bucket song had old and young jumping up, waving and wining... I was left speechless because at a mature party I honestly didn’t not expect Swappi to get so much ‘forward’, but nevertheless he did a great job. 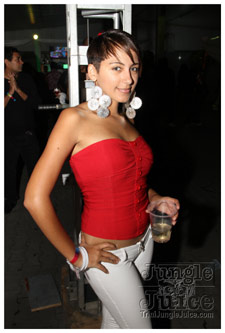 Up next was Lil Bitts with her 2012 hit “Mischief”, followed by lead singer of veteran band Roy Cape All Stars, Blaxx, sporting a new smart haircut. Ras or no ras he still mash up St. Francois!! Ladies love Blaxx and he had them eating out his hands as he went through his hits “Breathing Rum”, “Breathless”, “Hit Mih” and “Tanty Woi” among other Jab Jab come back again, “De Boss” Neil Iwer George followed. He reminded patrons that they cheated him in Soca Monarch last year and promised he was coming strong to take the crown this year, only time will tell. Good luck in the Soca Monarch competition.

They saved the best for last, the reigning Groovy Soca Monarch King Kees Diffenthaller with Kes the Band who sent patrons into a frenzy, especially the ladies. Talk about screams and blush face (lol). Without a doubt he brought plenty vibes performing all his hits some included “Precision Wine”, “Stress Away”, “Wotless” and all his other blazing hits.

In the food and beverage area there was a well stocked premium bar. Where the food was concerned the line was ridiculous waiting thirty to forty minutes is not cool at all. The food was very tasty they had, curry stew rabbit, suckling pig, mini ribs, Thai style chicken, fish, shrimp and rice, doubles, bake & shark, jerk wings, orange-glazed pepper shrimp, veggie samosas, barbeque pigtail, fish & chips, cassava fries and other delicacies.

Good job St. Francois and congratulations on your 50th anniversary. Looking forward to seeing you guys next year.