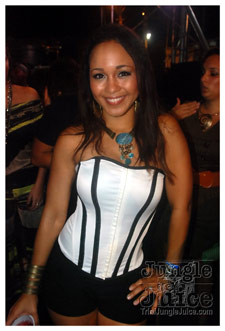 Carnival 2012 is in full swing with cooler fetes by so and all-inclusives by so. One of the must attend all-inclusives on the carnival calendar is ONE fete. This year Witco’s premium all-inclusive coordinated by TRIBE’s Ultimate Events did not disappoint. After being greeted by a skilled fire dancer at the entrance the first stop was the food court. We only sampled the bake and shark and curry but there was no lack of choice with options such as Chinese, Arabic, sushi, grilled food, Arepas, desserts etc. After getting some sustenance it was time to hit the champagne bar. There was no shortage of well-stocked bars throughout the venue serving premium liquor. There were also specialty bars for Angostura cocktails, NUVO, Patron and other top shelf brands. Needless to say patrons were having a good time trying to get their money’s worth!

The main event took place stage side when Kes the Band started things off and got the crowd in a wotless mood. Their set included guest acts Super Jigga TC, JW and Blaze and Shal Marshall who kept the crowd pumping with their C2k12 anthems “Action”, “We Time” and “Trouble” respectively. Michelle X also joined Kees on stage to perform their road march contender “Head Bad”. Iwer George kept the vibe going with his 2k12 jab jab song but also treated the crowd to a selection of his past hits which had everybody doing the Iwer, butterfly, Shadow, wave! Not even intermittent showers could stop the party, as true Trini's know rain only makes the fete sweeter. 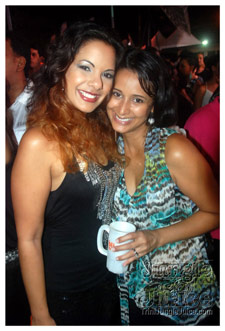 By the time Machel Montano HD and his band took the stage the crowd was more than ready to pump their flags. He and his dancers took the stage with their trademark high-energy performance and sent the crowd into a frenzy with the 2k12 power songs “Reveling” and “Pump Your Flag”. We even spotted Tatyana Ali in the crowd having a ball as she took in Mr. HD. HD band members Farmer Nappy and Patrice Roberts also performed their offerings such as “Surrender” and “Slow Wine”. They were joined on stage by the prolific Kerwin Du Bois who serenaded us with his mega groovy hits “Bacchanalist”, “I am Soca”, “Runaway” and “Baddist”. MM then returned to the stage and kept the crowd pumping with his groovy tunes including “Mr. Fete”, “In Charge”, and “Vibes Cyah Done”. He left the crowd Pumping their Flags ("Pump Yuh Flag") and wanting more!

If you can’t tell by all the detail ONE Fete 2k12 was besssssss! We danced until the tassa came on and the po po started to put people out. It was a true testament to the Vibes Cyah Done. On to the next!