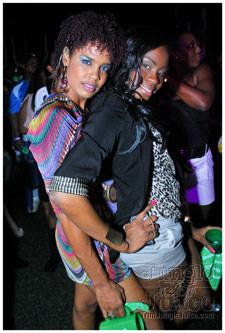 For the better half of almost a decade the biggest Carnival event in Tobago has been Bmobile Soca Spree. This year the event was in its 7th edition and it was no exception to the rule. Things were a little awkward this year, well actually, downright strange! The regular headliner, the 2 million dollar man, Mr. HD himself came on as the opening act. Along with his compliment of talented back up dancers Machel Montano HD instantly took the crowd out of their state of shock and confusion and got them revelling.  Some of the ladies in the VIP made sure that they got noticed, and that they did. Machel took note and gave a little demo of some of the wining styles he’s seen from South to Town, Arima to Tobago. Considering how much the crowd loved the reigning Soca Monarch and Road March king, he might have been able to run the show from start to finish on his own. But I don’t think the event would have lived up to their ‘star power’ theme if that had happened. During his almost 2 hour performance he was joined by Patrice Roberts and Farmer Nappy, both of whom helped him get the performance so heated that some clothes had to come off.

During the intermission I found my way into the VVIP for a little while and bounced up on Mr. Tambrin, Mr. Bachannalist, and some food that smelt real good, but sadly, the show start back before I could link a plate. Attention was drawn back to the stage with the preview of a Tobago carnival band called “Fantasia.” This was followed by another local; Fire Fusion, one of the hottest sounds out of the sister isle. The tag team got something going and even had 2 foreign visitors from the crowd come up for some wining lessons.

Now I don’t have to pretend that having anyone perform AFTER Machel is a hard thing to handle, ESPECIALLY IF YOU’RE A FAN. Luckily for Bmobile Soca Spree, ‘Star Power’ and level vibes was on their side so the show didn’t take a nose dive. In fact, was real heights when Shurwayne Winchester & You took the stage with his dancers. Plenty a waist got loose for the Wining Addiction and don’t talk about when it was time to Jiggle It....De thicky...with the 100% Jiggle....You had to see it to believe it. Now I was wondering to myself how the general admission crew was getting along, being so far from the stage and all; well is like the man read my mind. Shurwayne said he had a personal problem with gates and with a familiar intro in the background, he made his way off the stage, up onto the camera man table and then onto the fence bordering general admission. For some reason while everybody was getting love, one man decide he wanted to give static and started getting licks from the police....It does happen. 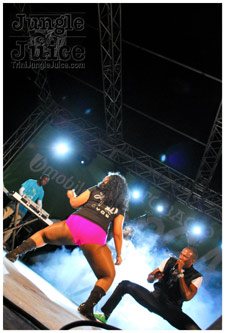 With no sticking at all, Shurwayne was followed by Devon Matthews who, in addition to playing his own hits from this year, brought back some of the REAL old school Soca. Sorry to say, that was before my time. By this time, all who wasn’t in it already was ready for de Bacchanal. Kerwin Dubois gave hit performance which kept the crowd going and among other things, might have caused some females to lose their voices. After Kerwin Showed his love to the general admin crew it was time for double team that you could spot a mile away. JW & Blaze, the palancing crew from last year’s carnival came at it fresh and groovy this year. Besides their hit on the Maserati Riddim, they couldn’t leave without having the entire Dwight Yorke Stadium car park palance from side to side.

The heavy hitting ended with none other than Team GBM. Super Jigga TC & Shal Marshal took the crowd for all they had left. With all that ACTION who knows how much girls was causing TROUBLE...The world may never know. Swappi inna 4D was inna NO-D as he was a total no show, even though he was advertised to be on the program, I feel it for the girls who came just for him.

The unsuspecting closer to the show was another Tobago performer known as Waterman. He had some lyrics with him, so got an A for effort. The show was great to say the least, vibes was great, food was good and bar was well stocked. As for my 2 cents; if Mr. HD was the closer, Swappi was present and accounted for and perhaps some more heavy hitters for the season like Kes, Iwer George and even K. Rich were added to the show, the “Star Power” theme might have far surpassed its meaning.