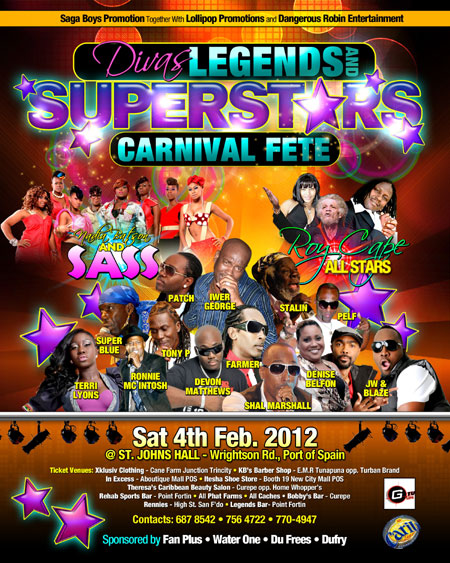 Port-of-Spain, Trinidad. January 31, 2012 -- The calls of Trinbagonians and visitors alike for an event that converges both artistes of yesteryear and today’s soca heavyweights, is being answered this coming weekend. On Saturday night artistes like All Rounder, Super Blue, The Black Stalin and Ronnie Mc Intosh will meet at St John’s Hall to hit the stage with Nadia Batson and SASS, Roy Cape and the All Stars, JW and Blaze, Denise Saucy Wow Belfon, Farmer Nappy, Shal Marshall, Tony Prescott, Terri Lyons, Devon Matthews, Patch, Pelf and the boss, Neil Iwer George. The event is dubbed, Divas, Legends and Superstars and according to organisers, the concept has been in the making for quite some time.

The cast of entertainers exemplifies the broad range of local talent that is available for the picking in T&T, according the show’s coordinators and their decision to utilise the St. John’s Ambulance hall facility was made based on a desire to create a central space for all patrons to feel comfortable coming to. “This is an event people in Port-of-Spain, Diego Martin, St. James, Maraval, San Juan, Santa Cruz and even patrons in the East and South, can come to easily,” said one coordinator. He mentioned that tickets had been kept at the reasonable price of $175 to encourage a large outpouring of support from the feting public. “ This is one time we’re saying, ‘parents come fete with your adult children.’ It’s that kind of vibe. Nobody will be coming to this fete to cause mayhem or destruction but more so to truly dance the night away with good music, tremendous enjoyment and a real sense of carnival sweetness,” said the organiser.

Tickets have been strategically placed at a number of outlets across the country, inclusive of All Cache clothing outlets, Bobby’s Bar in Curepe and In Excess at Aboutique Mall in Port-of-Spain. Patrons who want further information can also contact the promotional team at 687-8542 or 756-4722.

“With artistes like The Black Stalin, Ronnie and SuperBlue and not forgetting All Rounder, you’ll get a slice of how carnival enjoyment was and then we’re bringing patrons up to the time with some of the best acts this season like Farmer Nappy, Iwer, Nadia and her all female band, SASS, and we can’t forget Shal Marshall and Denise Belfon along with so many others. This fete will be one of a kind- truly one of a kind,” said the very excited organiser.

The event has been kindly sponsored by Carib, Fan Plus and Dufry Trinidad, and organisers say thanks to their kind support, this event will quite possibly be one of carnival’s most memorable events in 2012.

For more information on the event, visit Facebook, keywords- Divas, Legends and Superstars.