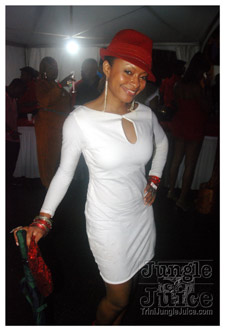 It's been a while since I've seen rain like this in the middle of 'dry' season in T&T. And I'm not talking about scattered showers ... it's rain cats and dogs through out the entire country. Have no fear, we at Trini Jungle Juice not afraid to get wet, and judging from the attendance at the Old Hillarians’ Association annual All Inclusive (aka Bishop's Fete) on this Saturday, no rain was stopping folks from enjoying their carnival season.

Located at O2 Park this year, I must give kudos to the promoters for setting up the venue to maintain the same atmosphere we're accustomed to their school yard. And of course, not forgetting a wide varity of cuisnes and premium bars which included our favourite ... champagne. Stewed horse anyone?

Live entertainment is never a let down at Bishop's. This year's line up included Roy Cape All Stars featuring Blaxx (who has shed his deadlocks), alongside new additions Ricardo Drue and and TJJ's homegirl Darnella Simmons. Yup, Rita Jones and Ola Tunji are no longer with the Roy Cape family. Bald hear or dreads, new members or old, the band delivered a solid performance.

Destra Garcia and her band graced the staged next dishing her 2012 releases along with a medley of past favourites. Then came the most booked band so far for the season, Kes The Band, who proved that 2011 "Wotless" will in fact remain an all time soca classic. But it was Kerwin Du Bois that stole the show with his smash hit "Bacchanalist" on the popular Antilles Riddim. The talk around town is Kerwin for the 2012 Groovy Soca Monarch title.

The fete rolled on for an extra hour past the 10pm scheduled end time, with the weather cooperating a little. We were informed that the fete should be returning to its home next year, but either way, TJJ will be present and accounted for.

Following the scent of Doubles,
Dre aka The Carnival Ref