By Keiron S.
Published on 28-Jan-12
“Dey call me Mr. Fete, since ah born ah never miss one yet!” ... And who would miss Fete With The Saints for C2K12!  At TT$625 you really got your money’s worth and you were supporting a worthy cause all at the same time!  In stark contrast to other college fetes all of our Big Sawats were ...
>> View Fete With The Saints 2012 Gallery
>> View Trinidad & Tobago Carnival 2012 Gallery 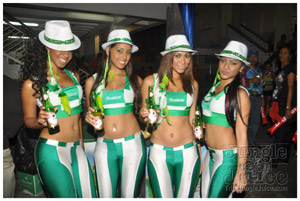 “Dey call me Mr. Fete, since ah born ah never miss one yet!” ... And who would miss Fete With The Saints for C2K12!  At TT$625 you really got your money’s worth and you were supporting a worthy cause all at the same time!  In stark contrast to other college fetes all of our Big Sawats were not all sitting down for the various performances, our Old Boys were moving!  The full spectrum of alumni came out for this event, from the recently graduated to past Presidents and Government Ministers, and most importantly all of the TJJ St. Mary’s Old Boys Crew!  I tell you even Peter aka d' local Juice was there in spirit!!!

As in pervious years the layout of St. Mary’s College allows for the segmentation and demarcation of zones all with it own intended vibe.  The Frederick Street Grass Court Yard was used for the entrance and with its calm foliage and many give away booths it set the most welcoming tone.  The food was in the Form 1 Court Yard (aka Small Yard), and with the chapel and groteau nearby the food was truly blessed.  Some more food and bars spilled over into the Cafeteria Court Yard (aka Big Café) and which now more looks like a big cage with the newly installed fencing.  And de wining section was in the Basket Ball Court with the Digicel Stage erected in front of the Centenary Hall!!!

The food court this year had the usual suspects that you would find in any All Inclusive with two tasty surprises... Singapore Noodles with Sweet & Sour Fish and Thai Chicken with Basmati Rice!  And we could not miss the elevated Ocean Spray Cocktail Bar serving Appletinis and Wine Spritzers for the ladies! 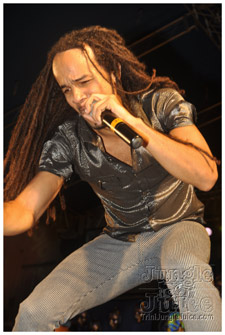 The first on stage was Dil-E-Nadan.  Their refreshing chutney repertoire was a good opener for any day fete.  As the sun set it was then time for some real jamming with Kes The Band!  Ok I’ve seen this routine before.  It was solid as usual with back up dancers and special appearances from Shal Marshall and TC, but for this sophisticated crowd it would have been nice to have some vintage calypso fused into his performance with a guest appearance from someone like David Rudder.  So instead the crowd had to endure appearances from JW and Blaze whose performance faded away faster than the sunset.

After the dust had settled and some encouragement from the DJ it was time for Roy Cape All Stars.  This was exactly what this crowd was waiting for, a solid brass band with a solid front line!  I have to give much respect to the new lead female vocalist Darnella Simmons who held her own as if she had been with the band since its inception.  But even she could not tame Blaxx who made everyone get on “Dutty”, then “Tusty” and finally go “Hunting” for White Oak to quench their Soca thirst!!!

Fete Wit De Saints is always good!  So it’s off to Blue Flame!!!

-Keiron was there… where were you?