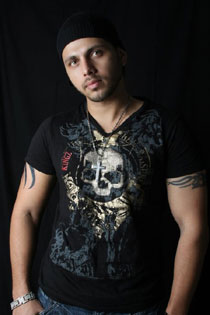 Port-of-Spain, Trinidad. February 6, 2012 -- He’s been doing music for approximately seven years but in 2012 his breakthrough came via a collaborative single called ‘Extraordinary’ alongside one of T&T’s most talked about entertainers, Swappi. It was just what he needed to get him seen and heard and since the carnival season of 2012 began in late December, Mr. Renzo has been receiving the love from radio stations across the board.

The 28-year-old Mt. Lambert, Trinidad resident who was born in Venezuela says the feeling is amazing. His breakthrough came after years of hard work and efforts to penetrate the Soca market. In fact, Mr. Renzo has been doing a lot on the music scene, but when it came to Soca music, he found it a difficult market to break into. On the Latin music front, Mr. Renzo has traveled to many places, delivering his Caribbean flavour to thousands in countries like Costa Rica, Venezuela, Chicago, New York, Guyana and St Martin. Despite this however, he longed to be heard and embraced in T&T so his effort to do so never stopped. In late 2011, he teamed up with Swappi and the pair delivered an ‘extraordinary’ single that was immediately lapped up by music lovers and radio DJs alike. “The video for the song was released a short time later and that made the single even more popular,” said Mr. Renzo. He highlighted that the video was produced by popular, local videographer, Kern Rose. The song however was produced by another young, talented mind in the music business- First Klase.

Amid the ongoing celebration of his induction into the mainstream Soca market, Mr. Renzo delivered a second single. This time he was featured on a riddim alongside artistes such as Bunji Garlin, Problem Child, Jungle and Chin Mischif. “My track is called Soca Rocket-ship and the concept is all about taking Soca to all places and spaces across the universe,” he explained. Highlighting that the track had been receiving a lot of airplay for which he is thankful, the budding Soca artiste said he has plans on remaking both singles in Spanish versions at the end of the C2K12 season. His bi-lingual aptitude, coupled with his Venezuelan ancestry drives him to work hard at pulling both Trinidad and Tobago and the Latin world together. “My plan is to market the Spanish versions of both tracks to Latin and North American markets,” he revealed, adding that Soca is in his blood and as such, no matter what type of music he does, the soca influence will always be incorporated. “When I first came out, I created a sub-genre called, ‘Socaton’ which was a fusion of soca and reggaeton,” he said, indicating that his very first single ever released was a Socaton single called, Muevete.

Happy to have penetrated this season and certainly looking forward to continuing along this vein of success, the young entertainer says he plans on working hard even after the carnival season has ended. On Sunday, he performed at Blood Bank’s All Inclusive fete and is looking forward to performing at other big events as the C2K12 season continues.