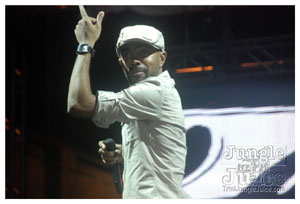 Boom bang bing, The Appraiser and Mac Fly on the island for the weekend to enjoy some early carnival action before we head back down in a couple weeks for the grand finale.  Second on our weekend agenda is the much talked about Central Bank Fete.  We heard nothing but good things about it last year, so anticipation was high.  TJJ arrived just around the 7:30 mark and after some issues with the Media list not being correctly updated, we were in and ready to absorb the sights, sounds and culinary delights that is Trinidad and Tobago Carnival.

Kes The Band had just started their set as we were walking in and while they went through their intro routine, Kes was at the bottom of the stairs backstage waiting for his cue and sipping on a bottle of water.  It was show time now.  The band jumped straight into some of their monster jams from 2011 including their smash hit Wotless.  By now the very large crowd was well lathered up and ready for the transition into the 2012 jams.  Michelle X joined Kes on stage to perform their collabo for this year, Head Bad on De road.  Dressed the part, for a carnival performance, the color of her outfit matched that of the pomerac blossoms that litter many a yard across the country around this time of year.  Pomerac, my favorite!  Infused with Kes’ signature pop soca vibe, Head Bad set the stage for one of the real creepers for carnival 2012.  Stress Away on the 4D Riddim took center stage on the entertainment scene this week with the launch of the video, a world class video I might add, along with the release of the remix featuring the Dogg himself Snoop!  Talk bout after one time is two.  Who would have ever imagined hearing Snoop Dogg on a soca track.  Soca to the world oui, much props to Kes for that.  Stress Away took the fete into a frenzy.

As with many a premium All Inclusive for carnival, this fete was well attended by a mature audience, and not just younger party goers.  A fact not missed by Kes, as he launched into an onslaught of classics; Like Feeling It and Loraine, which the crowd sang word for word while Kes held his mic in the air, Golo and Pump it Up, just to name a few.  Definitely one of the most memorable moments of the night, and there were many.  JW and Blaze joined in with their 2012 offering Carnival is We Time, another 2012 favorite, but left the crowd wondering why they didn’t also deliver their mega hit Palance.  Well, that question was to be answered later on that evening when as part of their duties as hosts for the evening, they treated the crowd to Palance while MC’ing for the DJ.  This was clearly yet another ‘moment’ in this fete as they had the entire crown Palancing from left to right, albeit just with their hands in the air.  The venue was in fact a street that had been closed off so there was not much room for actual lateral movement, a complaint we heard throughout the evening and something the organizers my which to think about for next year. 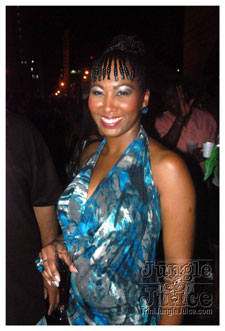 The culinary delights were extensive, gourmet doubles, exotic meets, dishes that represented cultures worldwide, and lots of local favorites like bake and shark, and a stall that specialized in chow.  I try ah apple chow and a Portugal chow dey, pressure.  Some folks said that they were a bit disappointed food was not available all the way through to the end of the fete.  Because of the configuration of the venue, getting down to the main bars from up front, was a bit of a challenge but we did hear a few complaints about the main bars having some issues and we did notice ourselves that there was no coconut water in the back stage bar until well into the night, better late than never ;-).  Much respect to the bartender who made the journey through the masses to get the back stage bar a bottle of Single Barrel, a personal favorite when I’m not walking with Johnny.

In true super star fashion, Machel, who was carded to perform at 11PM did not hit the stage until just after Midnight.  This left him with just about an hour to do his thing and between his extensive list of jams and needing to make time for guest artists, the set was slightly rushed.  We did get a chance to hear Kerwin Du Bois do some free style on one of his mega hits for the season which was an unexpected but welcome surprise J.  That guy is having the season of his life!  I Am Soca with Patrice and Bacchanalist made people hold their head and wine, yuh know how Trini’s is do it.  Farmer Nappy also performed his hit, Surrender.  It was very interesting to us that Machel ended his set by doing his road march contender Pump Your Flag, and then followed it up with last year’s winning entry, Advantage, instead of the other way around, hmmm.

Special thanks to the Central Bank Team for having us.  See you next year!