Karma brings the rhythm and rhyme to LIME 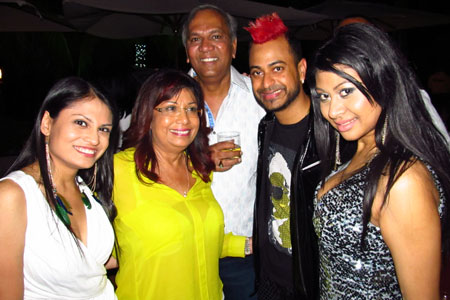 Photo: Ravi B and Nisha B pose with business mogul Junior Sammy and friends in the VIP section of the Hyatt's LIME soiree

Set to the backdrop of the picturesque downtown Port-Of-Spain waterfront, the dynamic Karma initiated the soundtrack to what was one of this Carnival season’s most highly anticipated events.
Thousands of attendees who were feasting on the fete’s countless culinary temptations and sipping on a seemingly endless supply of luxurious libations all got into the party mode from the beginning of the famed crossover band’s set.

2010 Chutney Soca Monarch Ravi B alongside fellow frontline vocalists Nisha B and Gregory Ayuen and their team of talented musicians delivered a diverse set which satisfied the many musical cravings of the massive crowd which consisted of local government ministers, international celebrities and the global feting elite. Attorney General of Trinidad and Tobago Anand Ramlogan, T&T’s Minister of Trade and Industry Stephen Cadiz, business mogul Junior Sammy and US actor Lance Gross were all present for the high-powered performance.

The youthful band captivated the mammoth gathering at the Hyatt with its fusion of original Chutney-Soca hits and classic Calypso selections. The energetic, charismatic performers won the hearts of appreciative audience members (who varied in age, race and nationality) and broke down cultural barriers with their powerful renditions of Carnival 2012’s biggest grooves such as “Mr. Fete”, “Bacchanalist” and “The Vibes Cyah Done” and their mix and mastery of modern day Pop, Hip-Hop and Dance music smashes.

After ending their pulsating performance with a medley of 2012 Power Soca contenders, Karma received positive reviews from several satiated patrons and staff members on hand.

For 2012 the band Karma will headline several major shows and music festivals in Guyana and North America. The band also aspires to simultaneously promote the Chutney-Soca art form and Caribbean unity by featuring at more events within the region.

To keep up to date with Karma’s 2012 tours and latest happenings log onto: http://www.karmaholics.com