By Sidney aka Scorn Juice
Published on 18-Feb-12
What was the best fete for some patrons in 2011, may have lost some of its credibility in 2012 ...
>> View Scorch Carnival Inclusive Block-O 2012 Gallery
>> View Trinidad & Tobago Carnival 2012 Coverage 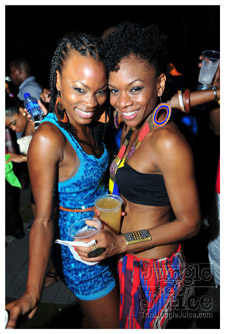 In the latest edition of a Scorch Event, and given the lukewarm public reaction to Scorch's predecessors, it would make sense to make this Carnival Inclusive a pinnacle and have it on a superior day that would include all the masses. Utilising technological advancements to sell tickets (I am still not sure what it was exactly) and keeping the party to a simple and predictable crowd the event started late and with that comes confusion and drama and lets say patrons going to buy drinks at another venue and waiting until the line cools down ... Better yet ... when you know your promoter is at the door trying to organise and sort and make sure people get in properly ... then you know THERE IS A SITUATION AT THE GATE!

The result meant that patrons entered Scorch Inclusive later than expected and had to quickly storm the bars and the food stalls. A Minor Hiccup some might say or some might say this was drastic and upset my night, throw off my karma, disturb my chi .... give them two hours ... what were they doing? Bubble Ah Bubble In The Block-O ...

However, Scorch seemed to be occasionally short-changed by his own production - due to its late start, patrons still felt that the event should go on after 12:00 AM however, promptly ... music ended at that time. Furthermore, the bathroom situation was actually quite appalling this year ... with lines circling and inter-weaving with each other, it actually turned people off from using the bathrooms. Was that the price worth paying for a fast paced adventure? 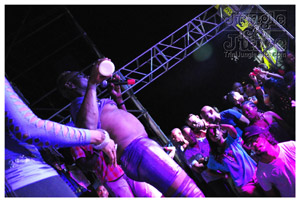 On the brighter side of Scorch's Carnival Inclusive I am pleased to present the following facts:

Verdict: A few damp squibs aside, Scorch's sensibilities made for an interesting yet subtle evening affair ...