By Sidney aka Scorn Juice
Published on 18-Feb-12
Where do you go on Carnival Friday in Trinidad if you want a mind blowing, entertaining experience at a party? If you want an all inclusive event with live performances from three (3) top bands and numerous amounts of soca artistes? If you want friendly people, lots of tourists, and ...
>> View Girl Power 2012 - Outrageous Friday Gallery
>> View Trinidad & Tobago Carnival 2012 Coverage 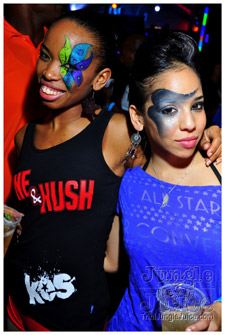 Where do you go on Carnival Friday in Trinidad if you want a mind blowing, entertaining experience at a party? If you want an all inclusive event with live performances from three (3) top bands and numerous amounts of soca artistes? If you want friendly people, lots of tourists, and the majority of the carnival population in one event? Answer ... Island People's Girl Power .... WELL ... not in 2012!  For a party that has set its name in stone, has cemented the excellence that is Fantastic Friday, it was surely a HUGE disappointment for its 2012 instalment.

Everyone is well aware of the power and excitement of Carnival Friday ... FANTASTIC Friday ... Where was the Fantastic???

There are  an abundance of fetes taking place at the same time on Carnival Friday.  The two other top contenders being the International Soca Monarch Competition, and the ever friendly black horse, Blue Range Cooler Fete. Despite the avid chants from people who have tried to take TJJ away from Girl Power - we still love to attend our annual party hosted by Island People. It is a must! It is the will! It is the way! We shall not be deterred or be at fault for not attending! However, after 2012, we are beginning to question! Our eyebrows are raising and it is a sad case of affairs when a top fete begins to crash .... a snowball rolling down hill does not get smaller .... *sprinkles* ... please remember last year .... Girl Power 2011 (http://www.trinijunglejuice.com/tjjnews/articles/2081/1/Girl-Power-2011-Outrageous-Friday-Review/Page1.html) 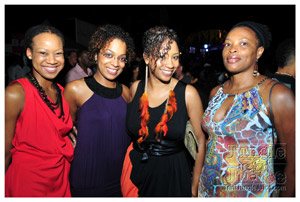 Having attended Girl Power for the last five (5) years, Jenny's Car Park has been an iconic location for this event and we can safely say it is home away from home for Girl Power advocates (except in 2009). As always being split straight down the centre with VIP on the left while facing the stage.  The crowd is split but that still does not deter anybody from having fun (or trying to have fun)! I also learnt from years gone by to steer away from the steps because of the hyenas and baboons that guard the steps and tell you in an unsavoury manner that you cannot stand there ... lesson learnt ... sourness avoided ... Or So I Thought!?

Before I start the hardcore essentials of Girl Power 2012, I am going to praise and highlight that the crowd was definitely a wonderful and fantastic bunch. You had a cosmopolitan microcosm of the world at Girl Power, all very friendly, attractive, not disgusting to look at, pleasant and as a layman would say ..."easy on the eyes" ... Its been awhile as well since I have been to an event where even the bartenders, beer ladies, double's ladies etc, etc were very friendly and even quite attractive ... *sprinkles*  ... As I write this I wonder why did I focus on the service members and not the patrons, well I did spend a considerable amount of time by the bars and the food stalls, which can lead to two assumptions: 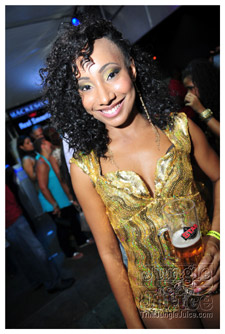 Moving along . . . oh why oh why, all of a sudden when Destra Garcia is singing, the music is cut, the band has to stop playing and she is pleading with the Police Officer to sing for one more minute? What just happened here?

True veterans of Girl Power will always remember that Machel Montano (or some other heavy weight profile of a soca artiste) closes off Girl Power. They are always on the stage at 5:00AM telling the police officers that “we going until the sun comes up”! However, last year we saw an inclination of the power of the police, because promptly at 6:00 AM the power was cut from Machel's set.   Nevertheless, he continued to have a party by singing a cappella and having his band run onto the stage and take total "advantage" of the stage. This year however, at 5:00 AM Destra Garcia and her band were still on the stage at the time of the officer's interruption. With utter shock and despair to patrons who were not only disgruntled and upset - the party HAD TO END! At 5:00 AM? Really?

Girl Power 2008 - I Quote "Party was supposed to finish at 6:00am, but nah the everlasting HD told the police to cool it and dance went until minutes to seven in the morning. Hahahahaha. Seriously, the police give the promoters them a bligh and we went partying until sun come up. Big up d Boys in Blue! What was even more hilarious was telling neighbours, who were now getting up to sweep their yards (with cocoyea broom too), "Morning" as we got into our cars to go home!" 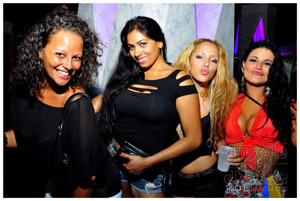 Girl Power 2009 - A Glimpse of 2012 maybe ...."Epic! Well you know Babylon reach tuh shut us down, but not before Bunji who was later joined by Edwin Yearwood, Benjai and Beenie Man, finished destroying the Oval. Whew! Although we're accustomed to leaving GP after the sun rises to a Machel performance, it still turned out to be a grrrreeeaaat Girl Power, rain and all!"

Girl Power 2010 - I Quote "Every year Girl Power promises to be exciting and entertaining. The party goes all the way into the morning when the sun is rising! This year was no different - Normally Machel HD brings in the sun but this year Bunji & Fay-Ann DID NOT DISAPPOINT! ... with special performances from Denise Belfon (god tha woman could bubble pon de ting) .... and of course Busy Signal who told everybody to Start Wining ... we palancing  upon we head 'til morning!"

Girl Power 2011 - "We will admit as usual he sings all the way until the sun arises ... and so he did ... What was amazing though ... even when they stopped playing music ... Machel HD and the ENTIRE family I swear ... were on the stage singing and stamping a capella to "Advantage" ... it was remarkable at the pure sheer euphoria of winning a competition that has eluded him so much ... take win Boy-Boy!"

Girl Power 2012 - ..... Disappointing ... Some people did not even dance, some people did not even wine on anybody ... what was going on? I know there are/were politics at play this year but my word ... did it have to be so disgusting? When the vibe was just beginning to build it crashed ... and burnt badly ... there was no-one liming at the end of the party like every Girl Power in the past years ... it was sad and disappointing ... what curse word did not come out of patrons mouths during the time 5:00AM and 6:00AM I cannot repeat ... (I know your PR department did its duty and handled the aftermath) 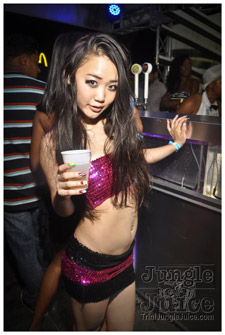 Island People, we do not blame you for the issues that occurred, and you know for sure you have all the love from the TriniJungleJuice family - we are supporting through thick and thin - but we truly hope that you guys make up for this blunder next year... By now the snow ball is as huge as the big circle of the earth you guys had planted at the entrance of VIP ... Its not cool ...

Verdict:
A Poorly Handled event that shocked the masses and caused uncontrollable inner riots with patrons who may or may not yearn for other Fantastic Friday parties in the carnivals to come ... we hope not ...