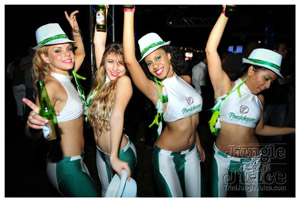 However bleak the future appears for Misty Ridge Events (if at all it is bleak ... we highly doubt it), at least it can comfort itself with the knowledge that their other events would not be ruled by the prowess and masses of Misty Ridge, their first event for the year 2012. What was/is known as a stylised event at the very exotic and reserved venue 'The Ranch' has probably now been turned into a very common and regular carnival all inclusive.

It is simple as the basic equation 1+1 = 2 .... Carnival 2012, All Inclusive, Eight (8) years running, Country Club (how unfortunate), well stocked general bars, various special bars serving selective alcohol, more novelty bars for the non-drinkers, various types of foods serving throughout the night, a DJ line up promising to play soca hit after soca hit after soca hit, and finally a couple of live performances to elevate your soul and raise your pores ... oh! what's that I just described? Misty Ridge 8 (2012 Edition) 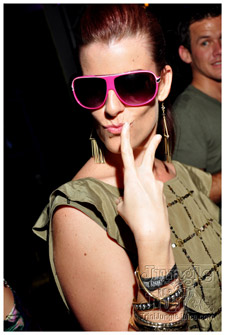 With Country Club being very spacious and all on one flat level, unlike The Ranch, patrons can easily walk around and fulfill their personal desires. As a result of being too large however, this leads to too much space being plotted all over the designated party area. That notwithstanding, they may have been seen as a plus and I guess people left Misty Ridge with no broken toenails or dirty shoes. The elevated stage for the DJ Booth was generally a nice touch however, some people thought its location was a bit too far. Furthermore, during performances, the crowds then bunched up at said stage leaving even MORE space scattered over the localised party area. Speaking of the crowd, what a lovely bunch came out tonight! The usual faces from last year were not present and there were clearly some new faces but such a lovely crop of people were present at Misty Ridge ... had my head turning once or twice *sprinkles* 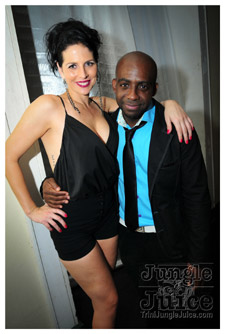 As mentioned before, this is an all inclusive event. The laws and rules of the road apply - Normal Procedures at the door ... have ticket will entry ... name on list .. must enter ... Drinks were served with a smile ... the bar seemed to be "okay" staffed ... reasonably I will say ... There were a few people waiting, but I also saw people go to the bar and get drinks within a matter of two to three minutes .. hey how else can I get my drinks!? The food stalls were the same ... its a simple process ... have food will serve when food done ... food done!!!!!

Soca 2012 has been deemed a groovy year and as a result, a lack of power soca extremely effects the vibes at events. Do not misunderstand me, but power soca will always have more power than groovy soca. Luckily, the groovy soca is exceptionally well received and the atmosphere still maintains some resemblance of exciting bliss. Furthermore, the infusion of intoxicating alcohol and friendly people dressed to impress made for an interesting night. Still however, Misty Ridge 2012 did not seem like a party. It more was a gathering of people sharing a drink, sharing food (yes, people were commenting on how the food was seasoned and what it was seasoned with) and furthermore, just standing up and socially dancing. Was this a social party maybe? Not from what we saw last year! - http://www.trinijunglejuice.com/tjjnews/articles/2043/1/Misty-Ridge-7-Ultra-Inclusive-Review/Page1.html - Nevertheless, the stage was set for a couple of spectacular performances from Lil' Rick, Kes & Kerwin Dubois who yes, they created energy, they maintained their prowess over the crowd and they lead the vibe for the latter part of the night. 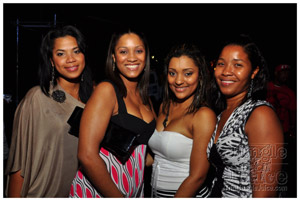 Verdict:
Good-looking to a fault, Misty Ridge boasted moments of undeniable grandeur. Elsewhere, though, it is deathly dull. Misty Ridge events were and will always be an artistic visionary promotional enterprise, unfortunately, not entirely their fault, Misty Ridge 2012 was not that great ...