By Kyle W. aka Bago Juice
Published on 17-Feb-12
Carnival 2012; by far one of the most anticipated in history, why? Well it could have been the calibre of Soca that was produced this year, or maybe it’s because economy picked up since last year and people could actually afford to take part, but I think it’s because...
>> View Carnival Weekend @ Shade Gallery
>> View Trinidad & Tobago Carnival 2012 Coverage 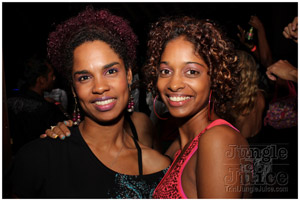 Carnival 2012; by far one of the most anticipated in history, why? Well it could have been the calibre of Soca that was produced this year, or maybe it’s because economy picked up since last year and people could actually afford to take part, but I think it’s because... CURFEW DONE!!!!!!! After being under a State of Emergency for 3 months and not being able to fete properly, the revelling was long overdue. Needless to say feting in Tobago wasn’t that affect in the first place, it’s like when your best friend isn’t enjoying a party, you can’t either.

So Fantastic Friday, in the Shade, newly expanded, expecting things to be going mad... Well let’s just say the ‘vibes’ nearly didn’t start far less to ‘cyah done’. De hype was at the point where almost everybody who would have been having a time and a half on any other Friday night was at home, glued to their television/computer screen watching the broadcast of the Soca Monarch Competition. But a positive mindset can do a lot, seeing as there wasn’t anything immediate to shoot I was able to notice that there was a new chef in house, his specialty, fresh bake & shark made from scratch! ‘De Original Chow Chow’ as some of you may know him as helped turn the night around. I mean, what else you could possibly crave at 1AM in the morning other than a fried bake stuffed with fried shark, lettuce, onions and the condiments of your choice? (Garlic sauce lol) It was indeed delicious, and things just got a little bit better from there on out. I met up on a couple from Canada who for the first time visiting had come to enjoy the weekend in Tobago before going to play Mas in Trinidad...oh and they also got married in Nylon Pool. The next night I ran into the newlyweds who described their ceremony as amazing, guess their honeymoon will be even better seeing as they were going to be right in the middle of the greatest show on earth. 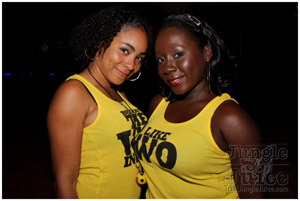 Saturday made me feel like was I was in the wrong place the night before. The place was practically RAM OUT! From end to end, corner to corner, people everywhere. There was plenty vibes, plenty beautiful girl, couples and....not so couples, let’s just say some people sound a way to be in a relationship and still be Single Forever. Everybody had one hell of a time drinks, bake & shark, nonstop wining, It was good and you might find me in the same spot, same time for Carnival Weekend 2013.