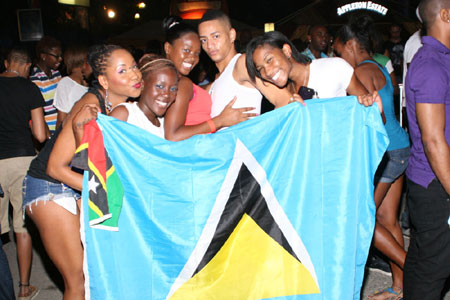 Photo: Natives of St. Lucia and St. Kitts and Nevis

(Kingston, Jamaica – February 26, 2012) – On Friday February 24, the first in the series of Bacchanal Fridays started off in top soca fashion with thousands of patrons gyrating the night away at the new and more spacious Mas Camp, now at Stadium North, with the ‘Future Shock’ theme resonating all around. This “Lift Off” party began with musical mastery from DJ Back to Basics from Trinidad, followed by an outstanding showing from DJ Bambino, fresh from Trinidad’s carnival celebrations. In true ‘Trever Off Key’ style, Bambino had the crowd pumped and hyped for his entire set.

The new Mas Camp was given a stately opening with a special ribbon-cutting ceremony with Minister of Energy, Mining & ICT, Philip Paulwell, Julian Robinson, Minister of State in this ministry and Damion Crawford, State Minister for Tourism and Entertainment, along with the directorate of Bacchanal Jamaica. Stadium North was indeed transformed into a brightly-lit land from outer space and included an interactive gaming skybox by headline sponsor Digicel, fronted by red and silver-clad alien women with long red plaits falling down their backs. Also a feast for the senses was Appleton’s ‘dancing bar’ featuring girls dressed in white and silver dresses and matching boots, whining and grooving on bar counters, Smirnoff’s towering digital display seen from all around the Camp, and the sweet, cool ice shots provided courtesy of Pure Country. ATL Autohaus was also a part of the mix with their display of a sleek, white 2012 Volkswagen Passat. Patrons can look forward to a new vehicle display from ATL Autohaus at each staging of Bacchanal Fridays throughout the season. 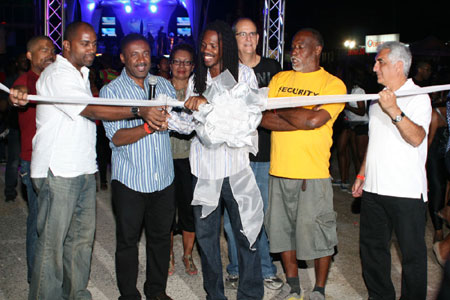 Photo: Minister of Energy, Mining and ICT - Phillip Paulwell, Minister of State, Energy - Julian Robinson, State Minister of Tourism and Entertainment - Damion Crawford along with the directorate of Bacchanal Jamaica

Following the ceremonious opening of the Camp, it was back to the party with DJ Back to Basics who had the crowd eating out of the palms of his hands. His experience and prowess as a top deejay was on display as he expertly guided the crowd through the hits of 2012 to old favourites as far back as the 1990’s, briefly blending in hot dancehall hits that brought the crowd to fever-pitch. He ensured that there was non-stop partying throughout the night and at the end of the fete, the crowd begged for more. This is Back to Basics’ fourth visit to Jamaica and for him carnival in Jamaica is special because, “It’s really unique to see the overwhelming response to soca in a reggae country. Soca music is embraced in all cultures but especially here in reggae island and that’s always amazing to see.” He also reminded the crowd that his fellow Trinidadian performer Kes the Band would be performing live at Bacchanal Fridays on March 2. DJ Smoke from Renaissance Disco will provide the musical stylings for the night.

Among the many fans and supporters of the event, Digicel Brand Ambassador Tifa, FAME 95 FM’s incomparable DJ, the Captain Collin Hines and Miss Jamaica World 2001 winner, Regina Beavers were some of the celebrities spotted enjoying the music and vibes of the evening. 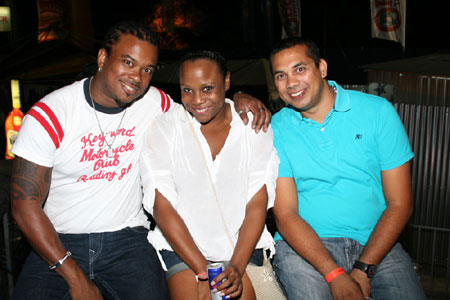 Also, socacise is back and starts on Monday February 27, with sessions every Monday and Wednesday at the new Mas Camp. Socacise is free to the public and promises two challenging and fun-filled hours of soca and exercise starting at 6:00 p.m., within the comfort of a spacious venue with free, secured parking for ‘socacisers’.

As part of Bacchanal Jamaica’s innovative thrusts for 2012, persons can become fans on the official facebook page at www.facebook.com/bacchanaljamaica.