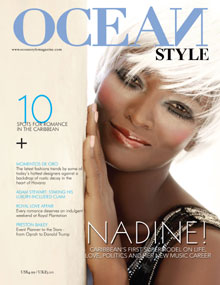 NEW YORK, NY. February 14, 2012. The highly regarded lifestyle TV show “OCEAN Style” has inked a distribution deal with New Media Buys to distribute its 30 minute lifestyle show across the US. The deal will see the show, which urges viewers to ‘dive in to the good life in the Caribbean’, broadcast in up to 43 Million Over the Air Household across the US via 200 different channels in all 211 TV markets and some 15 Million Cable Households.

The show has been very well received having already been broadcast into 20 plus countries internationally. Gordon commented “The response to the program has been phenomenal. All total we have inked deals that have taken OCEAN Style globally into over 100 Million households including our previous DirecTV and Sky distribution deals. This is by far our most significant transaction as it puts the show front and center into the lucrative US households that translate much more directly to advertising dollars. We are working assiduously to share the news and opportunity with our valued advertising partners to ensure that they have first stab at reaching this market.”

"I'm excited to be another piece to the puzzle bringing Ocean Style to the next level. I truly believe it’s time for Ocean Style and Executive Producer Douglas Gordon to announce to the world what I would call the best-hidden secret in Fashion, Lifestyle, and Entertaining Television. In addition to our traditional distribution we're especially excited about the Omniverse One World Television set top box and our device agnostic media platforms including an Ocean Style Android app, Ocean Style Omniverse Advanced Media Platform, and distribution via Omniverse One World Television empowering viewers to watch Live and or Video on Demand. It’s this type of advance media that's necessary to reach as many people as possible during this mass market shift not only here in the US but around the world." said DeMeo.

There’s an APP for That

Gordon continued, “We welcome the opportunity to work with Jason and his team. They have been enthusiastic partners in this process and have a compelling long term strategy for the show that we look forward to seeing come to light. It is a testament to the work that has been done by Chie Davis and the rest of our team to date and we look forward to continuing to raise the bar in the future seasons.”

The syndication will put the show into all 211 TV markets including the prime markets of New York and the Tri-State area, Miami, Los Angeles, Philadelphia and Chicago.