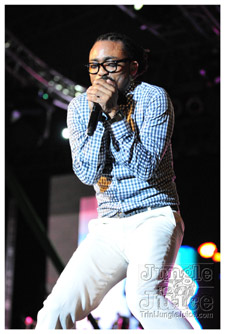 Rainy days and Mondays may usually get you down, except for Machel Monday. The staple for the Monday before carnival and an excellent reason to 1. be in Trinidad this early and 2. Be out on a Monday night. Certainly one of the top performers in the world, Machel Montano brings everything that makes him a super start. An amazingly professional show with all of the flair of lights, pyrotechnics, confetti. The timing and coordination of the show leaves nothing to complain about and each and every performance is brilliant, passionate and moving. This year celebrated 30 years of Machel Montano as an artist, and the show promised and delived the 3 generations of A star is born, The Xtatik years and the Journey in HD. Without a doubt, the best stage show for the entire carnival season… hands down. 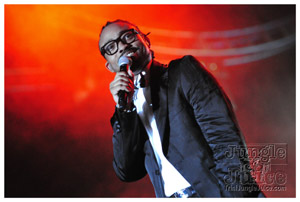 Apparently Monday is the new Friday for carnival. For a second year in a row the Hasley Crawford Stadium was at capacity for the HD camp. My guess is that pretty girls don’t work on a Tuesday in Trinidad anymore because they were all at the stadium and they didn’t seem to go home until after 2 in the am (yes I am talking about you love). Despite this concert occupying the entire football field and stands (covered and  uncovered) it was never an uncomfortable environment  from a congestion or safety stand point. I am always surprised by the volume, chic-ness and energy of this audience. Always impressed.

The stadium! A large show can never go wrong. Wtih the carnival stage set up under the clock and bars to it's right and entrance on the covered stands for platinum and I can't say where the others entered... shame. The entire field was covrered in a hard plastic with probably protected the grass, but of equal importance make navigating the field a pleasure. No complaints for this as a convert venue. Not even having to traverse the stairs to get to the bathrooms. do it again! 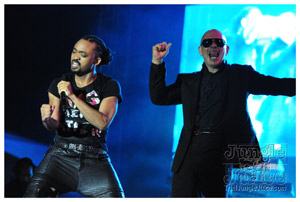 Big band, big stage, back up dancers, rope dancers, arcobatics... all resulted in a constantly moving sea of flags, rags and at times clothing. lots of energy, lots of electricity and tonnes of excitement. The pulse of the crowd throbed loud and hard and forced your body to sway with every single song that said Welcome to Trinidad carnival.

I couldn't tell you what food was available. Honesty I had enough issues, as did everyone that I have come into contact with to date with trying to get something... anything to drink that those God forsaken bar. Ie except for 3Zero0 rum. You could buy a bottle or get a free sample… This may seem like simple math, but when you sell out the stadium, you’re  gonna need a lot of bars. This was a major point of pain for drunkards. Now I am complaining because I went to the bar for rum, settled for Vodka, which I couldn't get, so settled again for JWB. Two bottles later... well things appeared to be much better :) 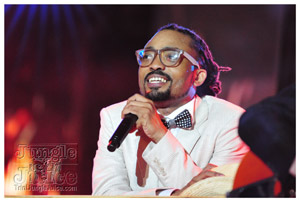 Park where you can, all over movie towne, Woodbrook and the foreshore... ample parking... suppose :) Once in the stadium it was an easy in. Security was ample and ticket staff was efficient. No lines. Unfortunately the poor bar staff was overwhelmed, so little could or should have been expected from them. Unlike the other shows during the week, décor, booths and frills were not part of the attraction; the show was on the stage… and that made up for everything else that may have been missing, lacking or inadequate.

For the cost efficient carnival goer, the price seemed like a bit much. $250 to lime at half line and back is a steep price for that vantage point, and the staggering $500 is astounding amount of currency to stand in a position that you’d generally take as the norm. The short answer is, I’d pay it again and again, because the entertainment is simply that amazing. Artist after artist performing at their best, and of course it’s Marchel in concert… the 30 year anniversary. 3 Generations of music. So if you’re a fan of the music, the people and the frenzy, it’s definitely worth it. 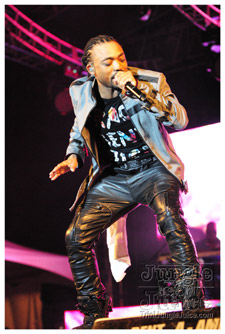 Patrice Roberts is still the sexiest woman in soca! Kes did perform this year, but Kerwin Du Bois' concert performance was proof that he's not just a song writer but has earned the rank of artist. Benjai is the people's champion and always brings that vibe that he loves the art from of soca in a way that can only be expressed by his music. The additions of Shadow, KI, Pit bull, Singing Sandra, The IZ and all the other tallents that merged to be part of the carnival on the stage as they ran in and out constantly and consistently surprising tireless onlookers makes this show the BEST. MM is about the music and the vibe... and the HD camp always extends a warm courtesy to the TJJ family that is always appreciated.