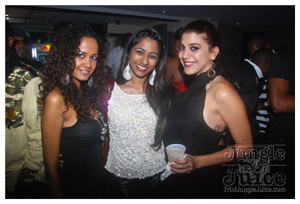 For the entire day, inclement weather made its mark nationwide.  From the wee hours of March 1, till 10pm at night the heaven showed its power to open the clouds at will. What cannot be stopped is destiny.

Boom Champions 94.1fm in collaboration with Club Fuzion in Cascadia, St. Anns, launched its Fuzion Thursdays "Party on the Slopes"

While it was expected that the Lenten season, combined with the earlier stated weather condition would curtail the number of invited guests, committee members were confident in the brand that is Boom Champions.

Women filtered into the newly redesigned club to enjoy the ambiance and most importantly, the free drinks before 12pm.

Free drinks before midnight will continue each and every Thursday.

Guest performers will also be on the bill. The night was destined to be a success as the club grew closer to it's capacity. The excitement level was raising and it further increased as hip hop/soca dancers Unstable D Gift started the live performances.

The controversial song which summarized the carnival bacchanal was first aired on  94.1fm, it is receiving rave reviews and is now being played by other radio frequencies.