By Anthony aka Frenchie Juice
Published on 15-Feb-12
Carnival Wednesday is here and I am heading to my 13th fete of the season… a bit tired but not ...
>> View S.O.S 'Ah Trini All Inclusive' Gallery
>> View Trinidad & Tobago Carnival 2012 Coverage 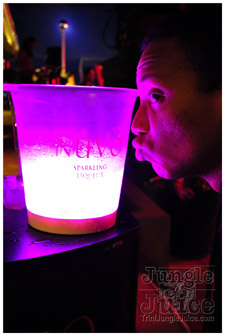 Carnival Wednesday is here and I am heading to my 13th fete of the season... a bit tired but not running out of Gas!!!  It's gonna be a long night by the Chaguaramas area as TJJ is attending 2 fetes over there: S.O.S Ah Trini All Inclusive and the traditional Bacchanal Wednesday. VIBES FUH DAYS Guaranteed!!!

I don’t know if you all remember S.O.S. last year, so let me please refresh your mind a minute with 5 points:
- All Inclusive Fete with premium drinks and delicious food
- Artists performances
- Top DJ’s
- Vibes Vibes Vibes
- A crowd not behaving at all, Bacchanal Galore (if you want proof…. weaves on the ground cyah lie …)

So me and Scorn Juice headed there around 7.30 pm as this fete was supposed to take place from 5 pm to midnight! We arrived around 8pm, which was later than last year as we didn't forget that it took a while to get a crowd. The accessibility to the party was okay, as there was not much traffic; then first surprise of the night, it was extremely easy to park because the parking was almost empty, yeah empty… mmmm already a bad sign ??

Getting inside, we were welcomed by the delicious Hostesses of Nuvo and Bailey’s and were already drinking, impossible to say no, we TJJ guys have good education.Checking the venue, we had the same feeling as last year, almost nobody.  Wait we came too early again or what??? AHAHAHHAA, believe me, I was anxious again and I came down with the same question Will it buss?? OH MYYYY.... Waiting for the ambiance to kick in, we had some drinks and 2 or 3 cups of corn soup, just to escape the long line of people waiting for proper food. 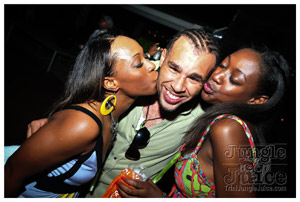 9pm – 10pm  tick tock  tick tock, the ambiance is still not there, 2 hours to go and it was still boring. Thank god the bar was fully stocked to pass the time. The party-goers were really quiet, staying in group and liming… no action, no pressure, The god of Fetes apparently didn’t spray the crowd with his jam jam powder. SOS WE NEED VIBES NOW, we doh wanna sleep! DJs Back To Basics, Anonymous & Richard Simply Smooth were trying to send us out of space without a lot of success, until the BACCHANALIST himself makes an appearance. Yes Mister KERWIN DU BOIS with us for a show… everybody knows him, everybody knows his music and lyrics: Results: OHHHHH BACCHANAL, the crew of foreigners who came to the fete went on bad bad, big up Bermuda, y’all are de BADDISTS!!!

By the time Kerwin was done with his excellent performance, we thought it time for Swappi & His Bucket, but unfortunately we got disappointed as he never made it. 1 hour or less to go,  Back To Basics and Kerry the Drummer came back in action with various and uniquely different combinations of tunes. From the good oldies songs til the tunes of 2012, we were trying to get a minimum of vibes, but we failed as the atmosphere stayed very social.

12pm ... Time to roll again, and it was about time. Sad feeling at the end, the energy of last year never showed up, but what happened ? Sleepy crowd, Too much groovy songs??? SOS was more a lime than a fete but it’s ok, every event has its ups and down.

Until next year SOS... we gone, direction BACCHANAL WEDNESDAY!