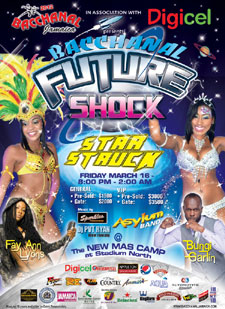 Fay-Ann Lyons is a true soca royal, having been born into a Trinidadian musical family in 1980, the daughter of eight-time Carnival Road March winner, Super Blue, and calypsonian singer Lady Gypsy. This talented singer and songwriter entered the soca scene in 2002 with “It’s My Turn Now” and since then, has earned many accolades including being the winner of her home country’s International Soca and Groovy Monarch competitions in 2009 with the songs “Meet Super Blue” and “Heavy T Bumper” respectively. That same year, Lyons became the first individual to win the Power, Groovy and People’s Choice Awards during Trinidad’s Carnival Friday, making her the first individual, male or female, to do so. To date, Lyons, also known as ‘Silver Surfer’ and ‘Lyon Empress’, remains the only female Trinidadian artist to win the Carnival Road March three times. This powerful contralto has been performing since 2002 and writes most of her songs. She is well-known for hits including “Get On” and “Display” and is a former member of the Invazion band and current member of the Asylum Band.

In 2006, Lyons became the wife of the equally successful soca artiste Bunji Garlin, who will also be performing live at Bacchanal Fridays this week. Born Ian Alvarez, this ‘ragga soca’ artiste has been credited as being a versatile performer with quick and witty lyrics. He explains that his stage name refers to the powerful bungee jumping cord which is flexible yet durable and is used for death-defying stunts. Since Garlin’s entry into the soca industry in 1999, he has continuously shown that he is not afraid of challenges or to step outside the box, and has been rewarded with many titles including four-time Soca Monarch champion in the years 2002, 2004, 2005 and 2008. Garlin, also referred to as the ‘Lyrics King’, is known for hits such as “Clear De Road”, “Banana” and “Plenty Gyal”.

The powerhouse combination of Lyons and Garlin will be complemented by musical stylings by fellow Trinidadian DJ Private Ryan. This DJ is not just a respected Caribbean deejay but calls his style ‘eclectic’ as his mixes, styles and musical influences reach far beyond the shores of his native home. While remaining true to his origins, DJ Private Ryan spent many years in Miami where he developed his craft to become one of the most-sought after deejays in the United States and has played at parties and clubs in many US cities including Atlanta, Houston and New York. His popularity continues to grow with Ryan now having his own spot on one of Trinidad’s top urban radio stations, RED 96.7 FM. Ryan is no stranger to Jamaica and has played at past Beach J’ouvert parties and other events on the island’s carnival calendar.

This ‘Star Struck’ Bacchanal Fridays also belongs to major sponsor Smirnoff who will be offering the first 200 patrons a free mug and drink upon entry. All patrons can also take advantage of Smirnoff’s $750 mug deal throughout the entire event. Smirnoff is also the sponsor of this year’s popular blue and red ‘Future Shock’ costume, Avatar, which can be viewed along with the other eight costume offerings for the season at Bacchanal Jamaica’s costume tent at the new Mas Camp.

This Friday, socaphiles and revelers can be ‘Star Struck’ for $1,500 pre-sold/$2,000 at the gate (general admission) and $3,000 pre-sold, $3,500 at the gate (for VIPs). Tickets are only available at the new Mas Camp or at Ammar’s in the Mall and Sovereign Centre, Kingston. Bacchanal Fridays is staged each Friday during the carnival season from 8:00 p.m. to 2:00 a.m. For the latest news and updates, visit www.bacchanaljamaica.com or find us on Facebook and Twitter.