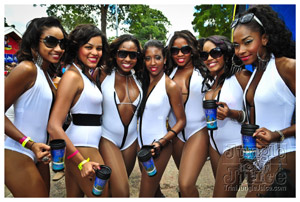 Carnival is Bliss!  And it sure was in the “same vibe...different Tribe” Bliss band on the road for 2012.  These folks did a great job of providing masqueraders with everything they could want for a fantastic road experience: music, gorgeous costumes, premium drinks, food, security, vibes...you wanted it, you got it!

Monday started on time and stayed that way both days!  Bliss crossed the stage early Monday and Tuesday so we were then free to chip, wine and jam our way along the route for the remainder of the day; a route that did not include a pass through downtown POS.  Narrow dirty streets, not for us! 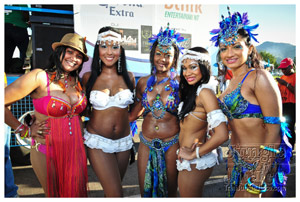 For me, mas must have two things: vibes and convenience!  Bliss provided both.  Unlimited drinks? So said, so done! My cup was never empty longer than I wanted it to be and there were ample servers to make sure the drinks kept flowin’.  Grey Goose, Johnny Walker and Hennessy were just a few of the premium drinks provided to masqueraders in addition to a full variety of chasers. Not good enough? Yuh coulda “sip, sip” champagne to your heart’s content because that was available too.  Three music trucks pumped out all the best soca mixed by top local and international djs.  If the number of people who “drop on the ground and roll” pump dey flag and wine with precision was any indication of a good time, I’d say people had a ball! Security was clearly present, but not overbearing and they did a good job of making sure things happened as they should.  We had lunch, at LUNCH TIME and were provided with a range of food options to choose from.  Hard to complain about that!

Bliss more than lived up to their promises and provided a great carnival experience.  I’d definitely play with them again.  Bring yuh friends, yuh man, yuh woman, yuh cousin… bring whoever puts a smile on your face and have a time.  Carnival is BLISS!