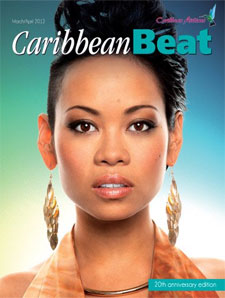 FRIDAY 11 MARCH, 2012 (PORT OF SPAIN, TRINIDAD):- The exciting new 20th anniversary issue (#114: March/April 2012) of Caribbean Beat – the magazine of the true Caribbean – is on Caribbean Airlines planes; in the mail to subscribers; and online, where readers can also access a complete flip-book of the current issue.

In this issue's cover story, "Hot off the Runway", Trinidad & Tobago designer Anya Ayoung-Chee tells Laura Dowrich-Phillips how her career has taken off since she won the Project Runway reality TV contest.

In honour of Beat's 20th anniversary, the magazine's designers Bridget van Dongen and Kevon Webster choose some of their favourites from Caribbean Beat’s 20 years of striking cover designs in the piece "20 years of covering the Beat". Meanwhile, former editor Skye Hernandez is "On the Beat", where she pays tribute to the magazine's coverage and longevity.

Caribbean style is highlighted as Lisa Allen-Agostini discovers eco-friendly design is both a modern idea and an old tradition in the region ("Green & pleasant lands"). In Grenada, David Katz paints the real picture of how Grenada’s women artists are going beyond the stereotypes of regional art. In nearby Tobago, Skye Hernandez uncovers why a gripping tale of a bloody sea battle off Tobago is being re-enacted for a TV docudrama ("Raising ghosts from a watery grave").

On the travel beat, while Janine Fung journeys from the ranch to the rodeo in Guyana, "Island Girl" Donna Yawching was reminded – surprisingly – of her tropical home while wintering on a Canadian island.

Foodies will want to follow as Franka Philip browses through new books on Caribbean food ("Doing it by the book") in her regular Caribbean Cookup column. Also on the food beat, Nazma Muller takes an ital tour of Kingston in "Eat. Pray. Love your Veggies", where she discovers that, while Rastas have always eaten healthy, natural food, now it’s gone gourmet.

And of course, Beat's regular departments deliver your regular dose of all things Caribbean. "Happenings "rounds up current and coming events on the Caribbean calendar, while James Ferguson’s “Beautiful looks at how an ancient Caribbean volcano inspired a master of European art.

The magazine wishes to extend very special thanks to all its readers, advertisers, contributors and partners over the last 20 years, who've made Beat one of the longest-running and most widely read magazines in the Caribbean diaspora, and looks forward to the next 20 years of moving to the Caribbean Beat.