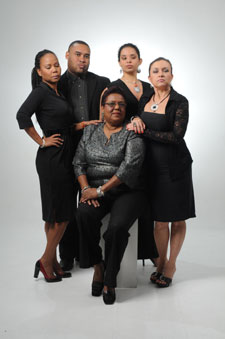 Written by Cacique Award-winning actor and playwright Theresa Awai, “Coming Home” is a provocative, poignant, funny and ultimately heart-warming new work that tells the story of how one family’s decades’ old secrets, jealousies, and rivalries are uncovered when four strong-willed siblings battle over their deceased mother’s will. As the action unfolds, we find that blood is indeed thicker than water… until everyone reads the will.

Cacique Award-winning director Raymond Choo Kong has pushed himself and his cast to dig deep for this challenging work, giving audiences a rare opportunity to see some of Trinidad’s most well-known actors – often best-known for their comedic skills – showing their dramatic chops.

Showtimes are 8:30pm Thursday through Saturday, and 6:30pm on Sunday.

For more information about the production, additional ticketing outlets, behind-the-scenes photos, and much more, visit RCKP’s Facebook page at http://www.facebook.com/rckproductions; email raymondchookong@yahoo.com; or call (868) 384-8663 or (868) 320-8215.