Karma stands tall at 'Clash of the Titans' 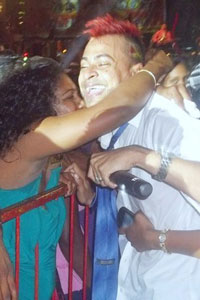 From all accounts the youthful and versatile Karma which is known for its original Chutney-Soca hits and its mastery of several music genres dominated the event held at the National Stadium in Guyana in front of a crowd of 50,000 eager Caribbean music fans. As in past performances in Guyana, the band received a Michael Jacksonesque response from the audience throughout its vivacious showing which began with lead singer Ravi B’s entrance to the stage on a crane standing 60 feet in the air over a sea of screaming fans in an ambience of fireworks, balloons and confetti.

According to Guyana’s Stabroek News, Karma stole the show and outperformed all other entertainers on the night’s performance card which included T&T’s Dil-E-Nadan, Rick Ramoutar, 2012 Chutney Soca Monarch KI and his band JMC 3Veni, the BMRZ and Melobugz Music Machine and Guyana’s Shakti Strings and Mahendra Ramkelawan. The trio of vocalists Ravi B, Nisha B and Gregory Ayuen rocked the Guyana National Stadium with powerful renditions of Chutney and Bollywood classics as well as recent Soca and Pop tunes. Much to the patrons’ delight Karma was joined onstage by Chutney-Soca stars Rikki Jai and Hunter. 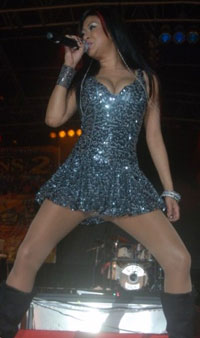 When asked about the “Clash of the Titans” experience Ravi B shared, “It felt exciting to be back in Guyana especially as Karma has a hardcore fan base there that always shows us love.

It was a truly proud and awe-inspiring moment for us to look back upon exiting the stage and see an appreciative audience standing in the rain shouting ‘Karma’ continuously. The show was a huge success and we were honoured to represent Trinidad and Tobago as ambassadors”.

Ravi also divulged that for 2012 the band Karma is already booked for return performances in Guyana, as well as shows in Orlando, New York and Toronto and that he will headline his annual Father’s Day concert in sweet T&T before hitting the global Carnival circuit.

The former Chutney-Soca Monarch also recently released a song for Phagwa entitled “Holi Kare” along with a tribute song for Guyana that has been embraced by several Guyanese communities all over the world. Fans can also look out for new music releases from Nisha B and Gregory in the not too distant future.

To keep up to date with Karma’s 2012 tours and latest happenings log onto: http://www.karmaholics.com/

Photos:-
1) A fan steals a quick embrace from Chutney Soca Star Ravi B
2) Nisha B entices the Clash of the Titans crowd