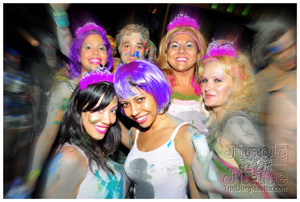 Finally it’s j’ouvert morning another on the short list of mornings we actually look forward to getting out of bed before 4:00am. Time to put on old clothes and already dirty shoes and hit the streets of Port of Spain. This year we decided to revel with Fantasy J’ouvert. Only in their second year the band definitely seems to have gotten the hang of this j’ouvert thing quickly with an impressive following and smooth operation.

Fantasy’s route took us from Fatima College along Mucruapo Road up to Western Main road then back along Mucurapo Road to the starting point. The route was enjoyable for the most part with relatively wide roads and hardly any traffic so we had plenty room to get on dutty! There was a steady supply of paint and mud so we also got pretty dutty literally.

Fantasy won big points with us for their crowd control. Size wise the band was big enough to feel legitimate but not overwhelming. The security was visible which was comforting although we didn’t feel threatened at any point as the band attracted a cool crowd of party animals and very few stormers. 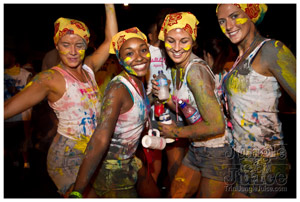 Logistics flowed smoothly from our point of view, as there were more than enough drink trucks to serve the band and as such there were no annoying waits to get drinks and kill the mood. As for the vibes, don’t let the rumours fool you, “stoosh” people have real vibes and J’ouvert with fantasy was definitely proof of this. The DJs played soca hits from years past right up to present and has us Palancing one minute and pumping our flags the next. They even threw in a techno mix that had mud covered folks fist pumping while chipping along Mucurapo road.

The icing on the cake was the surprise water trucks waiting for masqueraders upon their return to the meeting point. The after party was the perfect way to get a head start on washing off all the mud and paint while cooling down. Project Runway Season 9 Winner Anya Ayoung Chee even got into the mix when she climbed on top of one of the trucks and took a turn at wetting the crowd.

When things eventually wound up we were more than satisfied. We grabbed some breakfast and left the venue basking in the glow of an awesome J’ouvert morning courtesy of Fantasy.