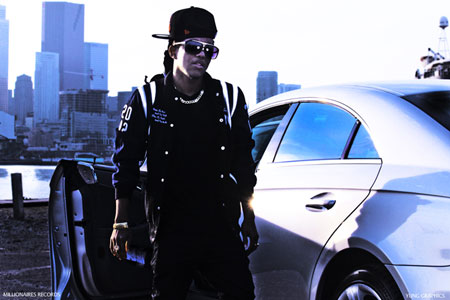 Port-of-Spain, Trinidad. March 26, 2012 -- Trinidad and Tobago’s Orlando Octave has captured the attention of some key people in international entertainment, people who’s subsequent report on the young artiste to record executives, business moguls and superstar artistes overseas, could certainly take him to a new level in the game.

A trip to Toronto on the weekend of March 16 saw Orlando complete both a commercial shoot for his soon to be released line of quality condoms- Play Wit It Condoms, and the video for his upcoming single, ‘Disconnected.’

Millionaires Records CEO, Richard Hope said the shoot was a great success, explaining that the shoot’s director David Cropper and his team enjoyed working with Octave throughout the three-day weekend. “The crew was great. We had people who worked on tons of major stuff in recent years. We had Kyle who worked with Steven Spielberg for most of his movies, Brandon who worked with the TIFF (Toronto International Film Festival) Media branch in Toronto, and Will who’s a veteran of 22 years in the business of film,” said Hope. He also highlighted that a number of representatives from media houses such s MTV and BET, were on set on the weekend where they got the opportunity to see and feel Orlando’s vibe and his musical energy, first hand.

“The Superbowl talent board director was also on set,” said Hope, highlighting that there is talk to introduce the Caribbean to the Superbowl format in 2013. Hope however said he understands dancehall music will be the first genre officially exposed to the show, which captured a record breaking 111.3 million viewers in 2012. “The talent board director wanted to have a look at Orlando and she did- she loved him, but there’s nothing concrete on that just yet,” he said.

Eight radio DJ’s from across New York, North Carolina and Atlanta who were on set on the weekend, have already requested the single, according to Hope and with that demand for Octave’s music already, Hope said his team at Millionaires Records Inc. is working overtime to ensure the single is ready for release on May 15. Describing the weekend’s activities as an expensive venture as a result of the quality productions provided by the team, Hope said he feels confident that Octave’s first real step into the international arena, will be a big one- one that he hopes the people of Trinidad and Tobago and the Caribbean are ready to embrace and support wholeheartedly.

Director of both the video and commercial shoot, David Cropper meantime said that even having worked with countless other artistes from across the world, he found that Orlando simply has, “that thing,” as he put it. “ He has that thing that a star has in him. He has what it takes to represent Trini to the world,” said Cropper, adding that Orlando’s music has crossover appeal. “I feel that even as a new artiste he’s ready for the music business not just at home in the Caribbean but internationally as well. Judging from the short time I spent with him, he’s a very developed artiste in my opinion- and he’s also a good businessman,” said the video director. Cropper described the shoot with the Caribbean entertainer as “the best” he’s ever had. “ When you have the right budget and artiste plus great music, it allows you to produce a greater product,” he said.

“The world better look out because Orlando Octave is coming,” said Cropper. He said he’s been hooked on the upcoming single, ‘ Disconnected,’ since he heard it prior to the shoot in Toronto. Octave meanwhile is getting set to release his Play Wit It condoms in the next couple weeks.